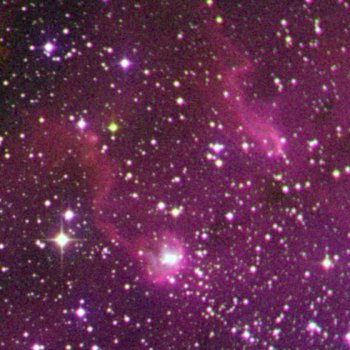 The famous tadpole pennant nebulae provide the name for this sector.

Source: DSS2 - see the information at the bottom right here for more information on the source of this image.

Positioned in front of this region is the much closer Aur OB1 association at about 1300 parsecs (according to Humphreys), which includes at least 6 O-class stars. H. M Tovmasyan and his colleagues, using the Glazar space telescope on board the Russian Mir space station, concluded that Aur OB1 is in fact two different associations, one at 1100 pc and the second at about 2000 pc. [3] This does seem to better represent the distance estimates for HII regions and molecular clouds in this sector and implies that the Aur OB1 associations and their related molecular clouds form the outer boundary of the Orion Spur in this sector, much as the Gemini clouds do further east. A recent analysis also suggests that Aur OB2 should be subdivided with a near association at about 3000 parsecs and far association at about 6000 parsecs in the Outer arm. [4] 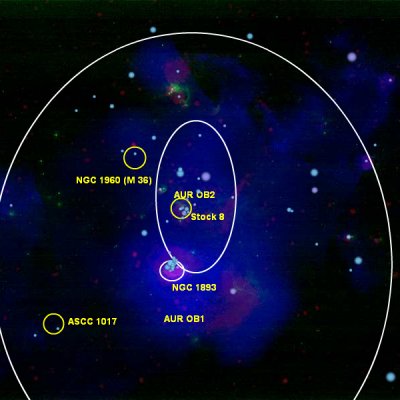 The major ionising stars, clusters and associations for this sector.

To the north is the huge molecular cloud complex at 1800 parsecs associated with Sh 2-231, the peculiar belted Sh 2-232, the high mass star formation region Sh 2-233, and the kidney-shaped Sh 2-235. A good image of this region can be seen here. At least one paper [11] suggests that the Fly nebula may also be related to this complex as it is at a similar distance. The two largest colliding molecular clouds in this region consist of 100 thousand and 300 thousand solar masses of gas and dust respectively and are causing intense star formation near and within Sh 2-235 [12]. The molecular cloud complex is most visible at microwave (CO) frequencies, and is densest around Sh 2-235, but the nebulae can be seen at the other frequencies as well.
& 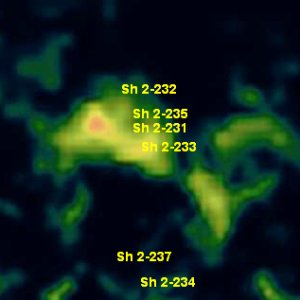 North of Sim 147 is another supernova remnant, SNR 179.0+02.6. This object is clearly visible in radio images, but little appears on it in the scientific literature. Green's comment on the radio image is "Thick shell, with background extragalactic sources near centre".

Just below the galactic plane at 177.7° longitude is CPM 18, a young stellar object surrounded by nebulosity and visible in infrared.

4. ^ Negueruela, I. & Marco, A. 2003, Astronomy and Astrophysics, Stellar tracers of the Cygnus Arm. I. Spectroscopic study of bright photometric candidates

11. ^ Moffat, A. F. J., Jackson, P. D., & Fitzgerald, M. P. 1979, Astronomy and Astrophysics Supplement Series, The rotation and structure of the galaxy beyond the solar circle. I - Photometry and spectroscopy of 276 stars in 45 H II regions and other young stellar groups toward the galactic anticentre