Basic plan of the Milky Way 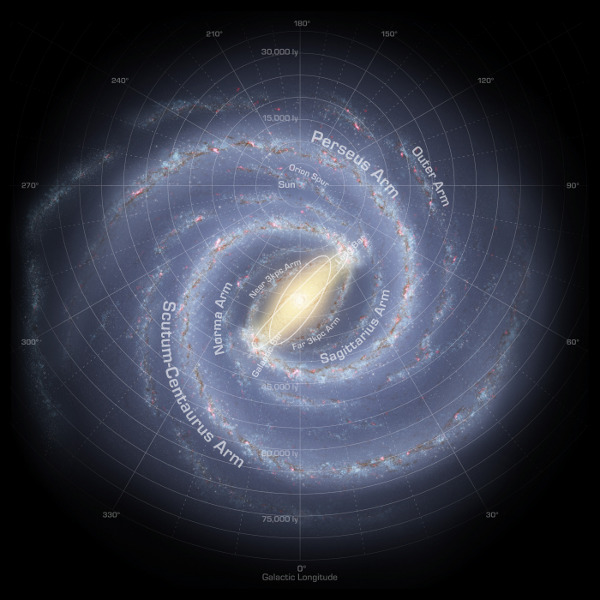 Robert Hurt's famous diagram of the Milky Way. (Rotated for this site by engrafi.)

It is easy to drown in the details of any map, so it is useful to start with a basic plan of the Milky Way. Those who want a more detailed (although less complete) map can visit the Face-on map overview.

One of the best (and surely the prettiest) basic plan illustrations currently available was created by the NASA astronomer-artist Robert Hurt and released in 2008.

Hurt's illustration was created to highlight scientific conclusions on the inner galaxy from a team of astronomers led by Robert Benjamin and associated with the Spitzer infrared space telescope. However, there are so few well done images of the Milky Way available that the illustration has been widely used in scientific papers, even by researchers who vehemently disagree with some of the Spitzer team's basic conclusions.

I've blogged about some problems with the Hurt illustration, including details in the Orion spur and outer galaxy. Fortunately there are other illustrations available that correct these problems and I'll mention one below.

One other problem with the original Hurt illustration is that it is upside down. The standard orientation for Milky Way face-on maps in scientific publications (and this site) has 0° galactic longitude (the direction to the galactic nucleus) facing downwards. Hurt's illustration has it facing upwards. There is nothing scientifically invalid about this orientation (it is completely arbitrary) but it is still rather confusing. It's a bit like a map of the world with Antarctica at the top. This has some novelty value but is probably not the best orientation to use for general education. So the version I'm using is rotated into the standard view.

Hurt's illustration shows a barred spiral galaxy with two major arms. Even this basic design is controversial because many astronomers argue that the Milky Way has four major arms. Hurt has put the other arms into his illustration as well but deemphasised them. 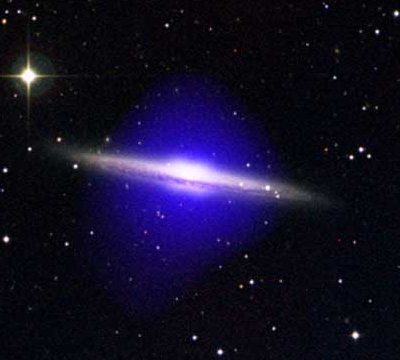 This Chandra image shows the hot x-ray halo surrounding the massive spiral galaxy NGC 5746. It also shows an optical view of the galaxy including the central bulge and thin disk. The Milky Way has a similar basic structure if viewed edge-on.

Unfortunately astronomers agree on the name of only one of these arms. This is called the Perseus arm and was discovered in the 1950s. It is the spiral arm that one sees first when looking into the outer galaxy (180°). As one might expect, it is most obvious at visual frequencies from the Earth in the direction of the constellations Perseus and Cassiopeia.

Many astronomers believe that the Milky Way has four major spiral arms and this is certainly what appears in the atomic hydrogen data as I describe in the chapter on kinematic distance estimates. Others argue that the third and fourth "arms" consist of a few discontinuous active segments and are not full spiral arms in the same sense as the Perseus and Centaurus arms. Some argue that the number of arms depends upon the frequency of light and the type of objects. For example, the Spitzer infrared astronomers favour a two major arm model because red giant stars (which emit a lot of infrared) are largely confined to the Perseus and Centaurus arms, whereas radio astronomers tend to favour a four major arm model because radio telescopes can detect atomic hydrogen in all four arms. Some references for this debate are supplied in my Four arms vs. two blog entry.

In any case, it is still possible to give the third and fourth arms names and describe their positions. More data is required to determine if they are as fully developed as the Perseus and Centaurus arms. 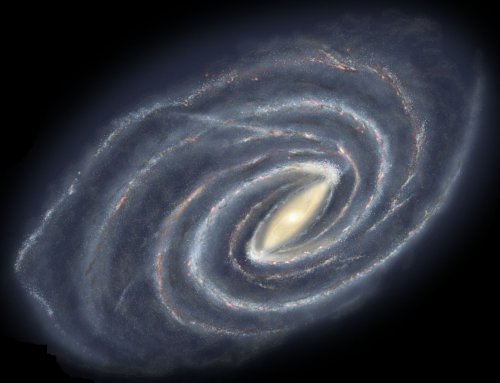 The fourth arm can be seen in the direction of the constellations Norma and Cygnus and so is sometimes called the Norma-Cygnus arm, the Cygnus-Norma arm, the Norma arm, or the Cygnus arm. The term "Outer arm" is used more often than any of the other names for this arm. This makes sense most of the time, but confusingly, the section of this arm visible in Norma is actually in the inner galaxy close to the galactic bar.

Hurt's illustration shows the Centaurus and Norma/Outer arms starting at the nearest end of the central bar to our solar system. The Perseus and Sagittarius arms start at the far end of the bar. When examining other barred spiral galaxies we can see that major spiral arms often (but not always) begin at the ends of the bars.

In addition to these major arms, there are several other arms described in the section on the galactic bar below.

Spiral arms are not continuous structures but are divided into active star-forming sections surrounded by less active sections composed of diffuse gas and dust. It is often useful to refer to specific active parts of spiral arms. In this website, I use the term "arc" to refer to these active sections. This includes the Cassiopeia arc (Perseus arm), Monoceros arc (Outer arm), the Carina arc (Sagittarius arm) and many others.

I will use the term "arm" only when referring to one of the major spiral arms as a whole. 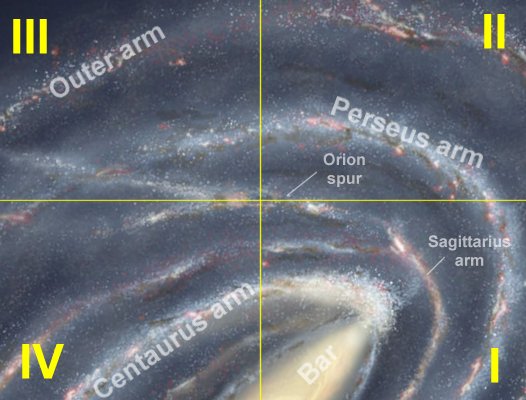 This image shows the four galactic quadrants (centred on the Sun) and details of the Orion spur. (Based upon an illustration by Diana Marques.)

The spiral arms in many spiral galaxies (including the Milky Way) are confined within a thin disk.

The thin disk of the Milky Way makes it possible to present the spiral arms in a two dimensional map. In reality spiral arms are 3-dimensional structures but over a large area objects within them can have their positions represented approximately on a flat map.

Astronomers have divided the disk into four quadrants, usually designated by Roman numerals. Unlike the Alpha, Beta, Gamma and Delta quadrants of the Star Trek mythos, the first, second, third and fourth galactic quadrants are centred on the Sun rather than the galactic nucleus. This is less aesthetically pleasing but more practical scientifically as almost nothing is known about objects on the far side of the galactic nucleus.

The central bar has a thicker bulge made up of mostly older stars.

The bar of the Milky Way is tightly wrapped by two additional structures called the near and far 3kpc arms. (This is short for 3000 parsecs because these arms are located approximately 3000 parsecs from the centre of the galaxy in a line drawn from the Sun.) Note that the 3kpc arms are distinct from the 4 arms I mentioned in the spiral arms section above.

The bar itself has a complex structure including an inner bar, a molecular hydrogen ring, two miniature bar spiral arms (internal to the bar and distinct from the 3kpc arms), a central molecular zone and at the heart of the galaxy, the 4 million solar mass black hole Sgr A*.

You can read this 2009 paper to find out more about the galactic bar and the 3kpc arms.

The Milky Way (like other spiral galaxies) is surrounded by a large halo region which contains globular clusters, large clouds of hydrogen gas, and a huge mass of the mysterious dark matter. 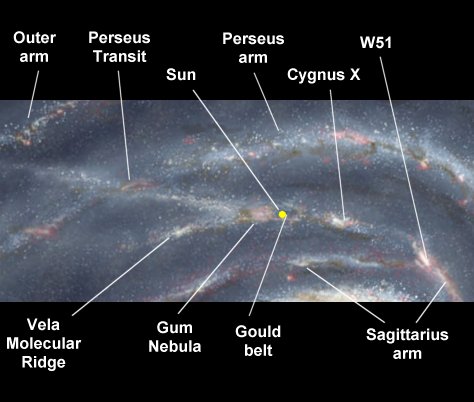 This detailed image shows the major known components of the Orion spur and the location of the Sun (yellow dot). (Based upon an illustration by Diana Marques.)

Our Sun is located within the Orion spur. Although not a spiral arm, the Orion spur is nevertheless a major Milky Way structure that crosses the Perseus arm, linking the Sagittarius and Outer arms.

Such spurs connecting two or more spiral arms are a common feature of spiral galaxies.

The Orion spur is sometimes confusingly called the Orion arm or the Local arm in scientific papers. I will try to avoid that confusion in this website.

The Hurt illustration does not represent the Orion spur very accurately and so instead I am using an image created by scientific illustrator Diana Marques that better represents the region of the Milky Way close to the Sun.

The Orion spur appears to branch off from the Sagittarius arm at or near the intense radio source W51, which is a large complex of star formation regions and supernova remnants.

It continues through the Cygnus X complex of star formation regions, which includes Cyg OB2, one of the most luminous OB associations known in the local group of galaxies. It passes through the Rift dust clouds and into an expanding ring of bright star formation regions called the Gould belt. The Gould belt includes the Orion molecular cloud and our own Sun (which is much older than the Gould belt and is just passing through).

The Gum nebula supernova remnant dominates the Orion spur just past the Gould belt. Beyond the Gum nebula, the spur forks. The main branch transits the Perseus arm in the direction of the constellation Canis Major and terminates in or near the Outer arm. A smaller branch forms the complex of molecular clouds and star formation regions called the Vela Molecular Ridge.

Perhaps not surprisingly, the scientifically most controversial bits of this description of the Orion spur are in regard to its ends. The Russian astronomer Veta Avedisova tentatively suggested an origin in W51 in a 1985 paper which states: "W51 may well belong to the local arm ... One also cannot rule out that the main arm might split somewhere in the vicinity of W51". This view is also supported by a 2010 paper, which more specifically gives the origin as the infrared source W51 IRS2.

On the other hand, a 2008 paper argues for a closer origin for the Orion spur in the vicinity of the infrared source G59.7+0.1 (IRAS 19410+2336), which is associated with the star cluster NGC 6823 and the nebula Sh 2-86. (This spectacular object has been imaged by both the Spitzer and Herschel infrared space telescopes.)

The author lists of the 2008 and 2010 papers referenced in the last two paragraphs overlap, suggesting that either these authors disagree amongst themselves or that opinion has shifted back towards a W51 origin for the Orion spur in the later paper.

The Perseus transit at the other end of the Orion spur is described in a major 2008 survey paper on the structure of the Milky Way in the third quadrant.