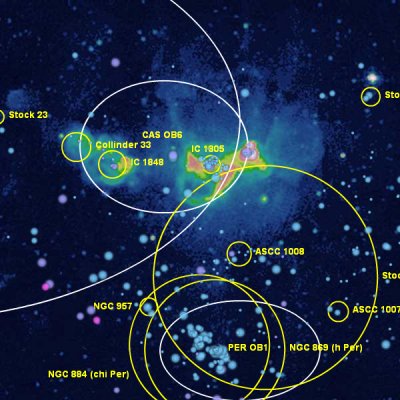 The great Heart and Soul star formation region, ionised by the Cas OB6 association, is most visible at radio frequencies. This image shows the major ionising stars, clusters and associations in this sector, including the Per OB1 association.

Gart Westerhout first observed the prominent radio sources W3, W4 and W5 in this sector in the 1950s. Amateur astronomers more poetically describe the area as "Heart and Soul" because of the dramatic appearance of the nebulae at visual frequencies. In particular, the HII regions associated with W3 and W4 look like a human heart and the HII regions surrounding W5 look like a fetus or newborn infant. Per OB1, one of the greatest OB associations known in the outer galaxy, lies to the south.

The Heart and Soul region is ionised by the Cas OB6 association and is one of the brightest parts of the Cassiopeia arc, which in turn is the brightest section of the Perseus arm visible from Earth.

W4 is part of a complex sequence of gas shells that stretch far above the galactic plane. [4]

The radio source W3 and HII region IC 1795 are located in a molecular cloud on the the heavily obscured western side of the Heart nebula. The best analysis of this region so far has used the Spitzer infrared space telescope and has found a Central Cluster that has formed a bubble driving a second generation of star formation in two other distinct clusters, W3 Main and W3(OH). [5] 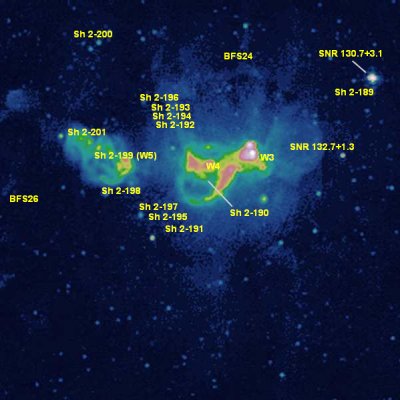 Most of the Heart and Soul sector nebulae (but not all) are prominent at radio frequencies.

Sh 2-201 is a tiny HII region that appears to float just to the northeast of the Soul nebula like a moon orbiting Jupiter. It lies at roughly the same distance as the Soul nebula and is ionised by a star cluster visible in infrared. [9]

Sh 2-191 and Sh 2-197 were mistakenly included in the Sharpless catalog and are, respectively, the galaxies Maffei 1 and Maffei 2. Sh 2-195 is located in the same direction as these galaxies but is apparently a Milky Way HII region. [14] However, little of significance appears in the scientific literature about Sh 2-195.

Sh 2-189 is the planetary nebula Abell 3 and appears to be located at about the same distance as the Heart and Soul complex. [15]

The Per OB1 association, which appears to be dominated by the famous Perseus double clusters h Per (NGC 869) and chi Per (NGC 884), lies south of Cas OB6. These 13-19 million year old clusters appear to lie at the same distance as the Heart and Soul region. [8], [16]. Cappa and Herbstmeier identify 15 O-stars [17] in this direction (including one O4 and three O5) and Kharchenko lists more than 60 B-stars of class B2 or hotter in NGC 869 alone. [8] The 6.9 million year old ionising star cluster NGC 957 also appears in a similar distance and direction as do the two newly discovered clusters ASCC 1007 and ASCC 1008. [8], [18] Assuming that these stars are indeed all part of the same association, Per OB1 stands out as one of the greatest known OB associations in the outer galaxy.

In the foreground of Per OB1 is the moderately old (147.9 million years) and close (380 parsecs) cluster Stock 2. [8] Stock 2 is part of the Gould Belt, the ring of bright stars through which our Sun is currently travelling. Stock 2 may contain HD 13022 (O9.5Ia), HD 14442 (O5.5) and many B-stars [8] however this field is a confusing one because it lies in front of the great Per OB1 association and most of these stars are more usually associated with Per OB1. [17]

13. ^ Humphreys, R. M. 1978, Astrophysical Journal Supplement Series, Studies of luminous stars in nearby galaxies. I. Supergiants and O stars in the Milky Way. and the unpublished catalogs available here.

20. ^ Russeil, D. 2003, Astronomy and Astrophysics, Star-forming complexes and the spiral structure of our Galaxy