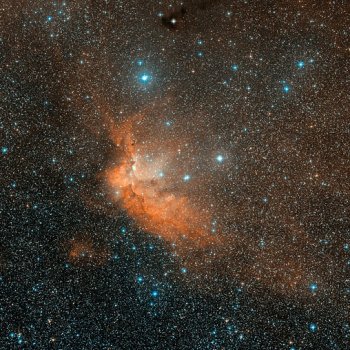 The scalloped edges of Sh 2-142 are visible in this image along with its ionising cluster NGC 7380. This region forms an important part of the Cep OB1 association in the Cassiopeia arc of the Perseus arm.

The Cassiopeia arc, the brightest part of the Perseus arm visible from Earth, extends into the constellation Cepheus in this sector, in the form of the large star association Cep OB1. The Cep OB2 association appears to the north in the much closer Cepheus molecular clouds. The sector also contains 5 Wolf-Rayet stars, including the two closest binary pairs known in the Milky Way.

Humphreys lists 11 O-stars within the large Cep OB1 association, which she says is located at a distance of 3470 parsecs. [1] Gerismenko notes that the Perseus arm tends towards longer distances from the Sun as the galactic longitude decreases through the second quadrant, and finds the following distances:

The Humphreys estimate for Cep OB1 is consistent with this.

The Clamshell region contains 4000 solar masses of gas and is associated with a molecular cloud, NGC 7382E, containing an additional 6-15 thousand solar masses of gas, as well as the star cluster NGC 7382, which is also part of the Cep OB1 association. The major ionising star is the eclipsing binary star DH Cephei (HD 215835) (O6+O6). [5]

Most of the molecular clouds in this sector fall within the Cep OB2 association, which is part of the Orion spur. The Cep OB1 association to the south forms the western most major section of the Cassiopeia arc in the Perseus arm. This image shows the known ionising stars, clusters and associations in this sector.

In addition to the three Kharchenko ionising clusters, there is another major concentration of bright ionising stars in the direction of Sh 2-132, which also lies within the Cep OB1 region [9] at a distance of 3180 parsecs. [10] This giant HII region, which in some images looks like an arcing celestial dragon, is ionised by two WR stars (WR 152 and WR 153) and about 11 OB stars. The binary star HD 211853 (WR 153) and an O 8.5 star lie near the middle of the radio shell associated with this nebula. [10]

The OB association dominating the galactic plane north of Cep OB1 is the much closer Cep OB2, which lies within the Cepheus molecular clouds. Humphreys lists 10 O-stars in this association and gives a distance estimate of 910 parsecs. [1] The hottest of these O-stars is the O6Iab supergiant Lambda Cephei (HD 210839). [1]

Cep OB2's central cluster Trumpler 37 ionises the spectacular nebula Sh 2-131 (IC 1396), which is part of an expanding shell of gas called the Cepheus bubble. These objects will be discussed in the section on the sector to the west.

Kharchenko lists three ionising clusters in this sector that lie in the direction of Cep OB2: NGC 7235, NGC 7281 and Alessi-Teutsch 5. Of these, only Alessi-Teutsch 5 lies at the same distance (900 parsecs) as Cep OB2. This 10.4 million year old cluster includes the ionising star and eclipsing binary HD 210478 (B1V). [3], [SIMBAD]

Of these, only Sh 2-134 lies within Cep OB2. It is ionised by the the 40 solar mass O6Iab runaway supergiant Lambda Cephei at a distance of 920 ± 200 parsecs, according to Avedisova. [6] Most of the great beacon stars of the Milky Way are too distant or too obscured by dust clouds to be visible to the unaided eye. Lambda Cephei is an exception. With an apparent magnitude of about 5.0, it is visible on dark nights near Zeta Cephei, the star that marks the left shoulder of King Cepheus. In clear sky conditions, the star is easily visible with binoculars every evening throughout the northern hemisphere. Detailed observations reveal that Lambda Cephei is moving at high speed and is creating a visible bow shock as it ploughs through the dust and gas of Sh 2-134. [13]

The origin of Lambda Cephei is controversial. The influential 1987 paper by the Hungarian astronomers Kun, Balazs and Toth proposes that Lambda Cephei was blasted out of the central cluster of Cep OB2, most likely NGC 7190, in a supernova explosion about 3 million years ago. This explosion played a key role in forming the Cepheus bubble. [14] This view was endorsed by a paper published in 2000 by Abraham, Balazs and Kun with a reduction of the time of the supernova explosion to 1.7 million years ago. [15]

However, a 2001 paper by Dutch astronomers Hoogerwerf, de Bruijne, and de Zeeuw disagrees. Using new data from the Hipparcos astrometry satellite that finds that the distance to Cep OB2 is 615 ± 35 parsecs [16] and that the distance to Lambda Cephei is 505 (+153 / -95) parsecs, they conclude that an origin in Cep OB2 is impossible and that instead, Lambda Cephei is more likely to have been blasted out of Cep OB3a in a supernova explosion 4.5 million years ago. The paper does support a supernova origin for the Cepheus bubble, however, and suggests that the runaway B5 class star HIP 102274 (HD 197911) may have been knocked out of the centre of Cep OB2 by this explosion. [17] Sharpless associates HD 197911 with Sh 2-130, which is located well above the galactic plane at a latitude of 12.64°. [18]

Other objects in the direction of Cep OB2

Many objects appear in the direction of Cep OB2 but are actually located well beyond the Cepheus molecular clouds. 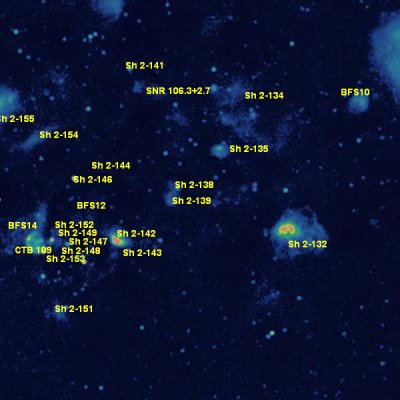 A large group of nebulae to the southeast are associated with the molecular clouds surrounding the Cas OB2 association further east. The supernova remnant CTB 109 is also bright in this radio image.

Sh 2-138 and Sh 2-139 both appear to lie well beyond Cep OB2 at or beyond the distance to Cep OB1 and the Cassiopeia arc. Sh 2-138 is a compact HII region at a distance of about 5000 parsecs, containing a large star cluster resembling the Orion Trapezium cluster: it is centrally peaked around several massive stars (including at least 4 ionising stars), and is dense with more than 550 stars at its centre. [24]

BFS10 is part of a large star formation region that also includes the HII region DA568. Russeil gives a distance estimate for the complex of 5250 ± 290 parsecs. [25]

A number of nebulae appear in the direction of [UUT2000] Cloud A and Cloud B [30]. These are part of the larger complex of dusty molecular clouds surrounding the Cas OB2 association [30] and described in the Brain and Bubble section.

The two cores of the molecular cloud [UUT2000] Cloud A are visible in this full resolution MSX infrared image.

Sh 2-146 is split in half by a dust cloud and is excited by a highly obscured O7 star. [34] Crampton estimates a distance of 4700 parsecs [35] and Paladini estimates a distance of about 5500 parsecs (personal communication). Both of these are kinematic estimates based on the gas velocity measured around the nebula and may be overestimated because of known streaming movements in the Perseus arm. [36]

Sh 2-154 is ionised by the giant star LS III +60 28 (B0III) at 1400 ± 300 parsecs, according to Avedisova. [6] Foster and Routledge have a similar distance estimate of 1500 ± 400 parsecs. [39] Sh 2-154 is associated with a giant molecular cloud that appears to contain 700 solar masses of carbon monoxide and perhaps 10 thousand solar masses in total (viral mass). It is possible that this cloud is found within the Cepheus molecular clouds and only appears to be further away because the gas has been accelerated by star formation within the cloud. [30]

1. ^ Humphreys, R. M. 1978, Astrophysical Journal Supplement Series, Studies of luminous stars in nearby galaxies. I. Supergiants and O stars in the Milky Way. and the unpublished catalogs available here.

19. ^ Dobashi, Kazuhito & Uehara, Hayato 2001, Publications of the Astronomical Society of Japan, A CO Outflow and a Molecular Cloud Core Associated with a Young Massive Star IRAS 22134+5834

37. ^ Russeil, D. 2003, Astronomy and Astrophysics, Star-forming complexes and the spiral structure of our Galaxy

41. ^ Green, D. A. 2004, Bulletin of the Astronomical Society of India, Galactic supernova remnants: an updated catalogue and some statistics. and here for the most current version of this supernova remnant catalog.