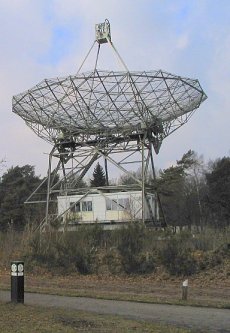 One would not naturally believe the cloudy Netherlands to be a good source for world class astronomers, but in fact astronomers from that tiny country have played a crucial role in the exploration of the Milky Way. In part this is because the universities of Groningen and Leiden have been the alma mater for many of the 20th century's leading astronomers, who moved after graduation to direct astronomy programs around the world. And in part, this is because of a 25 meter radio dish sitting near the Dutch village of Dwingeloo, in a swampy national park.

The Dwingeloo radio observatory was completed in 1956. Its first major project was a survey of major galactic radio sources carried out by Gart Westerhout in September 1956. Westerhout's radio catalog identified many of the largest star formation regions in the galaxy (at least those visible from the northern hemisphere), and their Westerhout numbers (such as W51) are still in use today.

The Dwingeloo observatory was able to pierce through not only the cloudy Dutch skies, but the far larger giant dust clouds that obscure much of the galaxy from the view of optical telescopes. As a result, Westerhout discovered a number of major HII regions, star formation regions and supernova remnants that do not appear in the Sharpless, Gum and RCW nebula catalogs. In addition, he discovered star formation and other strongly radio wave generating areas of nebulae that do appear in these catalogs.

So there are really 79 objects in the catalog.

At least 16 Westerhout radio sources are associated with significant Milky Way HII and star formation regions that do not appear in the Sharpless, Gum or RCW catalogs.

9 sources appear to be supernova remnants not associated with nebulae in the Sharpless, Gum or RCW catalogs. These are:

W24 is the centre of the Milky Way.

About 32 sources are associated with Sharpless, Gum or RCW nebulae. These are:

7 unidentified radio sources are located in or near the crowded and heavily visually obscured Cygnus X complex. Because of the many intense sources of radiation in this area and the difficulty of establishing distance estimates in such a crowded and obscured region, it is perhaps not surprising that these sources have not been clearly identified. These are: W59, W64, W65, W74, W76, W77, and W79.

There are 7 sources located outside the Milky Way:

Westerhout himself expressed doubt about four of the remaining unidentified sources. For W11 and W15 his notes say "probably 0-line error" and for W27 and W53 his notes say "possibly 0-line error". As well, the note for W26 says "Clearly the base of the "flare" at right-angles to the galactic plane". I'm not sure what this comment means but it appears to rule out associating W26 with a real galactic radio source.

This leaves only two mysterious radio sources outside of Cygnus X. These are W45 and W46. Westerhout tentatively identified the source W45 with Sh 1-58 = Sh 2-76 but noted "Identif. probably incorrect". SIMBAD identifies W46 with the infrared source IRAS 18549+0913.