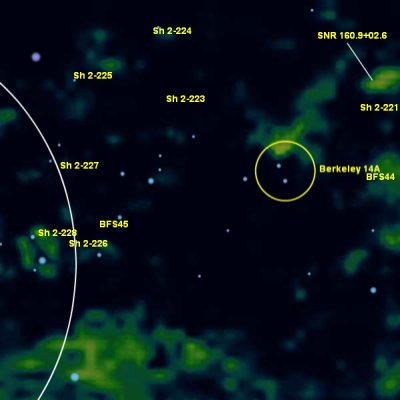 The young star cluster Berkeley 14A and a molecular cloud to its north are some of the few objects in the Auriga Gap. The nearby Taurus dark cloud complex, part of the Gould Belt, looms in the south.

There is a gap of almost 12 degrees with little emission at most frequencies in the western outer galaxy from about 168.4° to 156.6°. The SIMBAD astronomical database lists only 9 ionising stars in this region - and of the three O-class stars, one, KR Per, is misidentified - it is actually an F5V star [1]. Most of this gap is in the direction of the constellation Auriga, and so I've called it the Auriga gap.

There are plenty of ordinary stars in this region, but very few of the typical spiral arm tracers such as giant molecular clouds, ionising stars or HII regions. The Auriga gap appears to mark the end of the Perseus arm as a coherent structure. There are still molecular clouds and ionising stars at the distance of the Perseus arm further east, but they appear randomly and only occasionally, lacking the coherent structure of the Cassiopeia arc to the west. Closer to our solar system, within the Orion spur, the Auriga gap also marks an empty region between the Camelopardalis dark clouds to the west and the Gemini molecular clouds to the east.

At a distance of about 3500 parsecs, Sh 2-228 contains the massive infrared star cluster [IBP2002] CC01. (This is misidentified in SIMBAD as a possible globular cluster.) The 1800 solar mass cluster is 1 to 2 million years old, and the surrounding field stars about 5-6 million years old. [2]

Very little has been published on Sh 2-226 beyond a distance estimate of 4200 parsecs [3] and a comment that it appears much larger in radio emission than hydrogen-alpha. [4]

The small (less than 1 parsec in diameter) BFS 45 is associated with the newly discovered cluster Teutsch 132 and the B-class emission star HBHA 3715-24. [5]

Further north is the mysterious Sh 2-227 (LBN 781), which Avedisova suggests is ionised by the O9V star LS V +38 12. [6] There are no other significant references to this nebula in the scientific literature.

There are a few interesting objects even in the Auriga gap. The most obvious at radio frequencies is the supernova remnant HB9 (SNR 160.9+2.6). According to a recent paper [8], HB9 is located at a distance of 800 parsecs and is about 4-7000 years old. It is associated with the pulsar PSR B0458+46.

There are many other objects in the direction of the Auriga Gap not associated with the Milky Way's spiral arms, including the 1.28 billion year cluster Berkeley 16 = NGC 1798 at (160.78°, +04.85°) [10], the multiple giant star Capella (G5IIIe+) at (162.5885°, +04.5664°) [11], and visible towards the bottom of the field at microwave (CO) frequencies, the nearby and very dusty Taurus dark cloud complex, which lies at a distance of about 140 parsecs and extends well below the galactic plane [12]. The Taurus dark cloud complex will be described in detail in a future commentary, Guide to the Gould Belt.

3. ^ Russeil, D. 2003, Astronomy and Astrophysics, Star-forming complexes and the spiral structure of our Galaxy