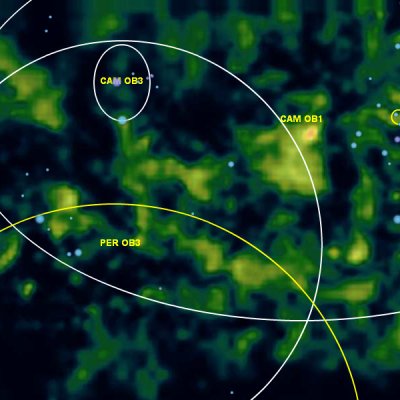 The Camelopardalis molecular clouds and the major ionising stars and associations in this sector are shown in this microwave image. The dense CO region at the upper right is associated with the young stellar object RAFGL 490 and the reflection nebula BFS 29.

The Camelopardalis molecular clouds and the Cam OB1 association form part of the outer boundary of the Orion spur, our local galactic region, and are located at a distance of about 800 to 1000 parsecs. To the west at about 2000 parsecs is the beginning of the Cassiopeia arc, the brightest part of the Perseus Arm as seen from our solar system. The Cam OB3 association, which likely ionises the HII region Sh 2-204, is located far beyond these regions in the Outer arm. In the foreground are the Per OB3 association, and the Stock 23 and Alpha Persei star clusters, all of which are part of the Gould Belt, the ring of bright stars through which our Sun is currently travelling.

The Camelopardalis molecular clouds are most visible in microwaves around (142°, 2°). This complex was catalogued by Japanese astronomer A. Obayashi and colleagues in the 1990s. Their catalog of 119 molecular clouds from galactic longitude 130° to 160° was described in a paper published in 1999. [1] Unfortunately, this catalog does not appear to have been published and so the exact catalog numbers for these clouds are unknown.

The young stellar object RAFGL 490 is a 8-10 solar mass B2-3 class star, located at a distance of about 1000 parsecs, and surrounded by a large rotating disk of gas and dust. [2] Such disks are believed to potentially evolve into planets and so this system has been the subject of several scientific papers. 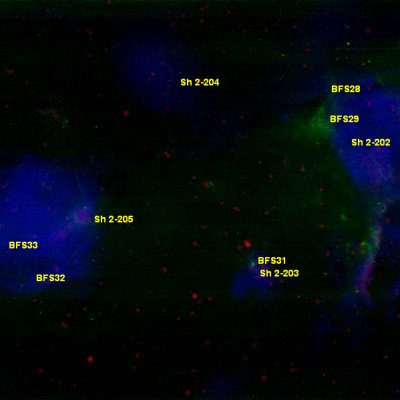 The most prominent nebulae in this sector are Sh 2-202 and Sh 2-205, both relatively nearby in the Orion spur. They are most obvious in hydrogen-alpha (shown in blue in this composite image).

The HII region IRAS 03064+5638, also bright in infrared and microwaves, is located further south at (141°, -1°) and contains the bright infrared star cluster [BDB2003] G141.08-01.06. One recent distance estimate for this region is 4100 parsecs. [3] although an analysis of the larger region puts most of the nearby objects at 2000 parsecs. [4] Immediately below this area is Lynds bright nebula LBN 679, visible in hydrogen-alpha, and estimated to lie at a distance of about 2000 parsecs. This coincides with the western edge of a large spur of atomic hydrogen gas in the Perseus Arm and may be energised by photons emitted by W5 to the west. [4]

Russeil combines the extended HII region Sh 2-203 (LBN 685) with the better known nebula BFS31 into one star formation region [5] and derives a distance of 1710 parsecs. BFS31 contains the infrared cluster [BDS2003] 59 [6] and is believed to be associated with the infrared source and HII region RAFGL 5094. [7]

To the northwest is Sh 2-202 (LBN 677), located at a distance of about 800 parsecs and illuminated by low mass young stellar objects within the Camelopardalis OB1 association. [4] Sh 2-205, which is believed to be ionised by the O8 star HD 24451 [8], lies at a similar distance. The 32 million year star cluster Stock 23 sits in front of Sh 2-202 at the even closer distance of about 380 parsecs. Stock 23, the association Per OB3 and the Alpha Persei star cluster are all part of the local Gould Belt ring of stars through which our Sun is currently travelling.