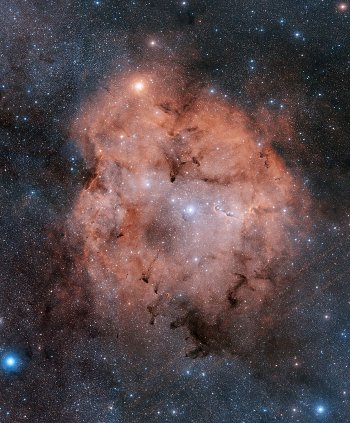 IC 1396 is the most prominent part of the Cepheus bubble. The reddish star towards the top of the nebula in this image is the enormous cool supergiant Mu Cephei.

The Cassiopeia arc, the brightest part of the Perseus arm visible from Earth, reaches its westernmost extent with the end of the Cep OB1 association in this sector. Objects continue to appear in the Perseus arm west of the Cassiopeia arc, however, including Sh 2-124 and the giant filamentary HII region CTB 102. This sector also includes the spectacular Sh 2-131 (IC 1396) and the beginning of the Rift dust clouds.

The Cepheus molecular clouds located at a distance of about 500 to 900 parsecs are an important part of this sector, and include the dramatic HII region Sh 2-131 (IC 1396). IC 1396 is the most prominent part of the Cepheus bubble, the expanding ring of gas and dust surrounding the Cep OB2 association. The Cepheus bubble is created by stellar winds from the hot stars in Cep OB2 and was most likely triggered by a supernova about 2 or 3 million years ago. [1], [2]

IC 1396 contains about 12 thousand solar masses of gas and dust and is ionised by the star cluster Trumpler 37. [3] There are about 480 visible stars in Trumpler 37 [4] including about 20 B-class stars. [5] Kharchenko lists 10 ionising stars - including 9 B-class stars and one remarkable O-class multiple star: HD 206267 (O6.5V+O9). She gives the age as 4.8 million years and the distance as 835 parsecs. [6] A recent study based on data from the Hipparcos astrometry satellite found the mean distance to Cep OB2 to be 615 ± 35 parsecs, so the Kharchenko estimate may be too large. [7]

In addition to the "A" component of HD 206267, which is actually a close O6.5V+O9 class binary, the system contains three other dimmer components. [8].

A second O-class star that may be in Trumpler 37 (although not listed as a probable member by Kharchenko) is the O9 class HD 204827. HD 206267 is by far the hottest and most influential star in the region, however. [9]

IC 1396 includes at least ten globules - dark clouds of dust and gas in which new stars are forming. The size and rate of star formation in these globules is strongly affected by their distance from HD 206267. [10] The best known of these globules is LBN 452 (IC 1396a), often called the Elephant Trunk nebula. This 200 solar mass globule contains two T Tauri stars (which have created a prominent cavity in the globule) and several dimmer protostars, with much of the star formation being driven by intense radiation from the nearby HD 206267. [5]

IC 1396 appears to contain Mu Cephei, also called Herschel's Garnet Star. This cool M1I class semi-regular pulsating supergiant has a radius about 1420 times the solar radius, making it one of the largest known stars in the Milky Way. [11]

IC 1396 has no common name, but given the location of the Elephant Trunk nebula, perhaps IC 1396 as a whole could be called the Elephant nebula?

Cyg OB7 and the beginning of the Rift

Cyg OB7 was the name of a proposed OB association. Several investigations have failed to provide strong evidence that it actually exists. [13], [7]. The only O-class star in the direction of Cyg OB7 in this sector is the O7.5 class LS III +50 28, which is believed to ionize Sh 2-124 at a distance of 2600 parsecs. [14] There is one B1I class supergiant, BD+48 3437, which lies beyond the Perseus arm at a distance of 6420 parsecs. [15] De Zeeuw, Hoogerwerf, and de Bruijne point out that "the line of sight toward Cygnus runs parallel to the local spiral arm. Some of the previous claims for OB associations based on large numbers of supergiants and/or early-type stars in this direction, e.g., Cyg OB4 and Cyg OB7, may therefore be the result of chance projections." [7] 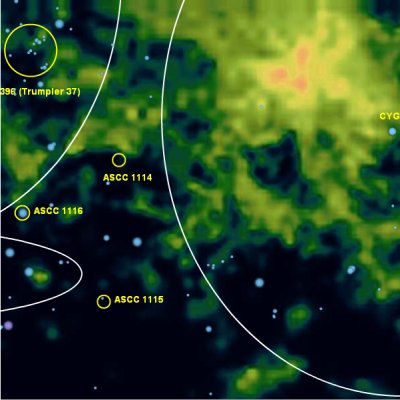 Stars embedded deeply in the Cyg OB7 dust clouds are visible in this microwave image, which also shows the major ionising stars, clusters and associations in this sector.

What certainly does exist in this direction is a complex of molecular clouds at a distance of about 800 parsecs that continues the Cepheus clouds seen to the east. By tradition, this complex is called the Cyg OB7 molecular clouds after the OB association that was once believed to lie in this direction. The Cyg OB7 clouds are very dusty. They obscure the sky so effectively in this direction that the central dark nebula [K60] 141 (less formally called Khavtassi 141) is often called the "Northern Coalsack" [7], [16] although this term is also used for several other dark clouds in Cygnus as well. Cyg OB7 begins the complex of local dust clouds that stretch from about 95° to 25° in galactic longitude and obscure large parts of the Milky Way in visual light. This complex is usually called the Rift because it appears to tear the Milky Way asunder. Fortunately, observations in radio, microwave and infrared frequencies make it possible to pierce the Rift clouds and observe what lies beyond.

Embedded within the [K60] 141 dark nebula and prominent at microwave frequencies is a 900 solar mass molecular cloud that contains the HII region IRAS21078+5211 (WB89 43) and the protostar GH2O092.67+03.07. The protostar is very young (about 3500 years old) and is surrounded by a thick rotating disk that is feeding material falling onto the central object. Despite its very young age, the material appears to have been accumulating so quickly that the central object may already be about 6 solar masses in size. [16]

The supernova remnant SNR G093.7-00.3 (also sometimes informally, but not officially, called CTB 104A) has a diameter of 35 parsecs and is located between the Cyg OB7 molecular clouds and the Perseus arm at a distance of about 1500 parsecs. No age estimate is available but it is noted that the remnant is "relatively old". [17] SNR G093.7-00.3 has several projections that extend well beyond the typically spherical shape of a supernova remnant. One explanation is that the remnant is expanding into an interstellar medium with portions that have an unusually low gas density that allows the expanding remnant gas to leak more quickly into the surrounding space. [18]

The prominent radio source 4C 50.55 at the northwest edge of SNR G093.7-00.3 is not associated with the supernova remnant - it is an extremely bright nearby radio galaxy. [19]

A second prominent radio source some distance to the west of SNR G093.7-00.3, 3CR 431 (NRAO 654), is well studied, with references in at least 35 scientific papers. None of these papers appear to suggest what it is, however.

There are other objects in this sector that occur at the distance of the Perseus arm, including the mysterious HII region Sh 2-124, located some distance to the west of Cep OB1. Although very little appears in the scientific literature on this region, recent detailed hydrogen-alpha imaging done for the IPHAS project reveals the structure of this violin-shaped nebula in spectacular detail. Blitz, Fitch and Stark give a distance estimate of 2600 parsecs. [21] Chini and Wink identify two uncatalogued ionising stars, with classes O7V and B2V, and give a distance estimate of 3600 parsecs. [22] Crampton, Georgelin and Georgelin give a kinematic distance (based on gas velocity) of 4400 parsecs. [23] Felli and Harten give a list of 5 ionising stars, including the O7.5 class LS III +50 28, and support the distance estimate of 2600 parsecs. [14]

CTB 102 (KR 1) is an enormous filamentary HII region approximately 200 parsecs in size, lying at a distance of about 4500 parsecs. Although visually obscured by dust in the local Cyg OB7 molecular clouds, KR 1 has been detected in great detail at radio frequencies by the Canadian Galactic Plane Survey. [24] 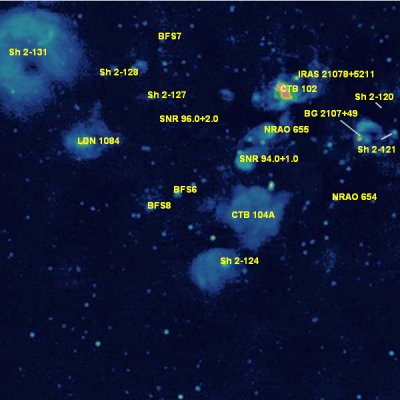 The enormous filamentary HII region CTB 102, a major component of the Perseus arm, is visible at radio frequencies behind the Cyg OB7 dust clouds. This image also shows the major HII regions and supernova remnants in this sector.

According to scientists with the Canadian Galactic Plane Survey, the supernova remnant SNR G96.0+2.0 lies at a distance of 4000 parsecs "in the Perseus arm, which is a quite reasonable assumption in this direction of our Galaxy. The SNR would be located at the western edge of a large H I cavity ... probably a stellar wind bubble created by its progenitor and maybe a few other stars some of which may have not exploded yet and others may even have contributed with their explosion to the shape of this bubble." They also note that "The visible part of the remnant has a diameter of about 30 pc ... is a shell-type remnant in an early stage of development." [26]

Beyond the Perseus arm

A radio map of Sh 2-120 shows a shell-like structure around a central source. [32] Very little information is available in the literature apart from this map.

The distant (about 10 thousand parsecs) HII region BG 2107 + 49 is located near in the sky to Sh 2-121. It is surrounded by a large 150 parsec shell containing 120 thousand solar masses of gas. The shell has been expanding for about 1.9 million years and is likely driven by solar winds from a central O4 class star. [35]

The HII region NRAO 655 lies far beyond the Cyg OB7 molecular clouds at a distance of about 8800 parsecs. It is ionised by a group of central stars of class O8.5 or cooler. [40]

20. ^ Humphreys, R. M. 1978, Astrophysical Journal Supplement Series, Studies of luminous stars in nearby galaxies. I. Supergiants and O stars in the Milky Way. and the unpublished catalogs available here.

24. ^ Kerton, C. R. 2006, Monthly Notices of the Royal Astronomical Society, A sharper view of the outer Galaxy at 1420 and 408 MHz from the Canadian Galactic Plane Survey - I. Revisiting the KR catalogue and new Gigahertz Peaked Spectrum sources

30. ^ Russeil, D. 2003, Astronomy and Astrophysics, Star-forming complexes and the spiral structure of our Galaxy