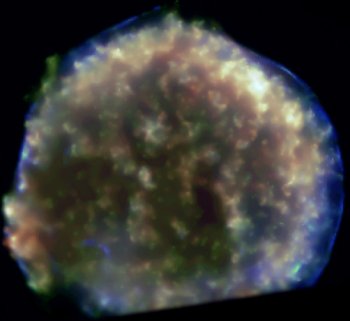 The enormous explosion is still visible almost 450 years after Tycho's supernova in this image from the Chandra X-ray space telescope.

The Cassiopeia arc, the brightest part of the Perseus arm as observed from Earth, continues into this region, although without the prominent nebulosity visible in other sectors. This sector is perhaps most famous as the location of Tycho's supernova remnant (SNR 120.2+01.4).

... this Starre appeared in the edge of the milkie way and had the same substance as the Galaxia hath

Tycho Brahe, perhaps the last great astronomer who observed purely with the naked eye, discovered the supernova now named after him on November 11, 1572, at Herrevad Abbey (then in Denmark, now in Sweden). He published a short book on his discovery "De nova et nullius aevi memoria prius visa Stella" (On the New and Never Previously Seen Star), which is often (although incorrectly) shortened to "De Stella Nova".

The distance to Tycho's supernova remnant has been estimated as between 1500 to 3000 parsecs. A recent study used a 2300 parsec figure [1], which places it within the Cassiopeia arc.

There has been some intriguing speculation that a G2 IV subgiant near in the sky to the supernova remnant may be a surviving companion star. It is travelling at an unusually high velocity compared to other stars in the region. However, other studies have pointed out that there may be other explanations for this high velocity. [2], [3]

The complex of molecular clouds that began in Camelopardalis and marks the outer boundary of the Orion spur, continues into this sector at a distance of 800-900 parsecs. Almost all the molecular clouds visible in microwaves in this sector belong to this local complex, which I've called the Cepheus clouds (although they are also visible in the direction of the constellation Cassiopeia). [4] Further west, the Cepheus clouds become a major local star formation region. In this sector, the Cas OB14 association (which in fact is more likely a B-association with no O-stars) at about 1100 parsecs floats as an island of bright stars between the Cepheus clouds and the Cassiopeia arc. The remaining OB associations in this sector (Cas OB1, Cas OB4, Cas OB7 and Cas OB8) are estimated to have distances between 2 and 3 thousand parsecs and form part of the Cassiopeia arc. Cas OB1 and possibly Cas OB7 may in reality also be B-associations with no O-stars. Very little CO is detected in this sector at the distance of the Cassiopeia arc - perhaps the great star associations in this region have largely destroyed the molecular clouds that gave them birth.

Cas OB8 is located at a distance of 2880 parsecs towards the far edge of the Cassiopeia arc. Blaha and Humphreys list one O-star, the O 7.5 III giant BD +60 261. [5] Kharchenko lists two ionising clusters in this direction, but they both appear to be in the foreground - NGC 659 at 1938 parsecs and NGC 663 at 1952 parsecs. [6] (Unless, of course, the distance to Cas OB8 has been over-estimated, which is possible given that it appears to be much farther than most of the star clusters in a similar direction.) Neither of these clusters contain O-stars, although NGC 663 contains a number of cooler B and M class supergiants. [5] Pandey and colleagues have published a recent study of NGC 663 and NGC 654 and give a common distance estimate of 2400 parsecs. [7] Leizawitz has suggested expanding the traditional boundaries of Cas OB8 to include several other clusters, including NGC 654 and Messier 103 (NGC 581). [8] Messier 103 lies at a distance of 2193 parsecs and contains two B2 stars. [6]

Just west of Cas OB8 and either embedded in the Cepheus molecular clouds or just beyond them about 1000 parsecs is the HII region Sh 2-187, which is visible at infrared, radio and hydrogen-alpha frequencies and is located next to (and probably embedded in) the brightest microwave source in this sector. This compact (2.6 parsecs in diameter) and young (100-200 thousand years) star formation region is most likely ionised by a B0 star and is surrounded by a 4600 solar mass molecular cloud. [9] The two main parts of Sh 2-187 are known as NGC 7822 and Cederblad 214. Russeil gives a slightly larger distance estimate of 1440 +/- 260 parsecs. [10]

The CO towards the extended and diffuse HII region Sh 2-181 seems to have the same velocity as the shell surrounding Cas OB7, which lies at a distance of 2000 parsecs according to a recent study. [15] 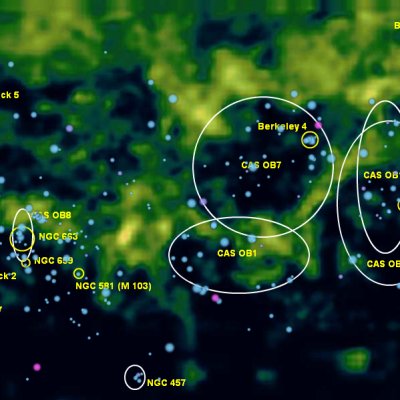 Cas OB7 is visible through a gap in the molecular clouds in this microwave image that also includes all the ionising stars, clusters and associations known in this sector.

Sh 2-183 is a large obscured HII region containing 44 thousand solar masses of ionised gas and dust and located 7000 parsecs away [16] in the Outer arm of the galaxy. (The fact that the authors of the article describing Sh 2-183 give its location as the "Perseus arm" is an example of how confused even professional astronomers have become about the location of the Milky Way's arms.)

Avedisova concludes that Sh 2-180 is ionised by the O7.5 V class star LS I +62 139 at a distance of 5150 parsecs. [17] This is roughly compatible with the distance estimate from molecular cloud velocity, which places this nebula at 6100 parsecs. [18] Either estimate places this object in the Outer arm.

The stars of the largest OB association in this sector, Cas OB7, are visible through a gap in the Cepheus clouds and are located at a distance of 1820 [8] to 2510 parsecs. [5] Recent observations have found a partial shell of atomic hydrogen surrounding the region which seems to have been partially blown out into the space between the Cepheus clouds and the Perseus arm. [15]

The ionising star cluster Berkeley 4 is in this direction but appears to lie at the greater distance of 3200 parsecs. [6] The only O-star in the Cas OB7 association listed by Blaha and Humphreys is the O6 V class HD 5689. [5] HD 5689 appears to ionise the faint nebula visible at radio wavelengths in this region. [19] However, there is some doubt that HD 5689 is really part of Cas OB7. [20] If it is not, then this association is really a B-association as it would have no O-stars.

Van der Hucht concludes that the Wolf-Rayet star WR 1, at a distance of 1820 parsecs, is part of Cas OB7. [21] WR 1 is a variable but does not appear to have a companion so the variability is likely caused by jets of material streaming from the stellar surface. [22]

Cas OB14 may not be an OB association either. Blaha and Humphrey's luminous star database lists no O-stars in this association, nor does Ruprecht's list. [8] Cas OB14 was originally added to the list of OB associations by a 1958 paper (in German) by K. H. Schmidt, where it was originally called VI Cas. This paper does not appear to explain why it was added to the list of associations. [23] Cas OB14 does contain a number of hot B-stars, including the B1 I supergiant Kappa Cassiopiae, which is a runaway star with a prominent bowshock [24] and pulsates rapidly with a period of just over two hours.

Blaha and Humphreys list 6 O-stars as belonging to Cas OB4, which overlaps Cas OB14 in the sky but is located much further away at the far side of Cassiopeia Arc, at a distance of 2880 parsecs. [5] Two of these O-stars actually belong to the clusters Stock 20 and Mayer 1 located in front of Cas OB4 at 909 and 1429 parsecs respectively. [6] Hiltner 8 is a B5 II giant, not an O-star according to SIMBAD. 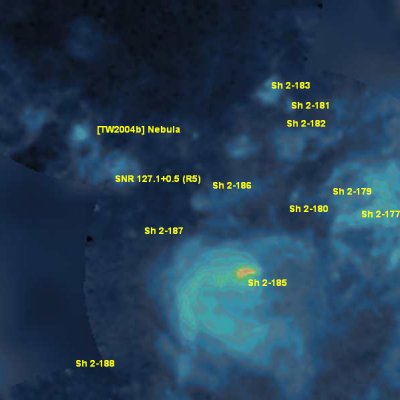 The nearby nebular complex Sh 2-185 is by far the most prominent object in this hydrogen-alpha image.

Both Sharpless and Adedisova associate BD +61 105 (O 9. V) with Sh 2-177, and Adedisova gives a distance estimate of 2200 parsecs. [17] This leaves the O9 I supergiant BD +63 12 on the Blaha/Humphreys list, which does not seem to be associated with any nebula or cluster and is actually slightly outside the traditional boundary of Cas OB4.

Blaha and Humphreys do not list any O-stars for Cas OB1, which like Cas OB14 and Cas OB7, may actually be a B-association. [5] Like Cas OB7, Cas OB1 harbours a Wolf-Rayet star: WR 2. WR 2 and Cas OB1 are believed to lie at a distance of 2510 parsecs. [21] The massive winds from WR 2 have blown a large bubble 32 parsecs in diameter in the atomic hydrogen surrounding the star. [25]

Avedisova gives the ionising star of Sh 2-175 as LS I +64 26 (O9.5 V), which Blaha and Humphreys lists as a field star outside of any OB association.[5] Avedisova estimates a distance of 1560 parsecs for Sh 2-175. Blaha and Humphreys gives an only slightly larger estimate of 1850 parsecs and an estimate based on CO velocity gives 1700 parsecs. [18] All of these estimates are essentially identical given the uncertainties and place this nebula in between the local Cepheus clouds and the Perseus arm. On the other hand, Foster and MacWilliams place Sh 2-175 at a distance of 2700 parsecs, well within the Perseus arm [27] and Russeil concludes that LS I +64 26 is actually a B1.5 V star at 1090 +/- 210 parsecs. [10]

5. ^ Humphreys, R. M. 1978, Astrophysical Journal Supplement Series, Studies of luminous stars in nearby galaxies. I. Supergiants and O stars in the Milky Way. and the unpublished catalogs available here.

11. ^ Russeil, D. 2003, Astronomy and Astrophysics, Star-forming complexes and the spiral structure of our Galaxy

14. ^ Temporin, S. & Weinberger, R. 2004, Astronomy and Astrophysics, An uncatalogued optical H II region in the outskirts of the Galaxy