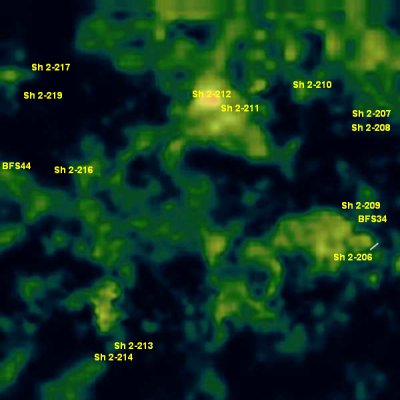 The often great differences in emission from different objects are very visible in this sector. Sh 2-211 and Sh 2-212 are most prominent at microwave frequencies.

The Auriga gap of low emission continues into the sector and extends into the constellation Perseus. Two young and well studied [1], [2] HII regions are visible in the Auriga gap at a distance of about 4 to 5 thousand parsecs: Sh 2-217 and Sh 2-219. Both appear to be ionised by single hot stars surrounded by cooler infrared clusters. The ionising star is likely of class B0V for Sh 2-219 and a slightly brighter O9V star for Sh 2-217. Sh 2-217 is about twice as large as Sh 2-119 and is accompanied by a 4100 solar mass molecular cloud. There is very little gas associated with Sh 2-119. [1]

There is, remarkably, nothing significant in the scientific literature on the HII region Sh 2-210, despite its large size in hydrogen-alpha and visibility (albeit on a much smaller scale) at radio and infrared frequencies as well. Russeil ventures a distance estimate of 2200 parsecs [8], which would give this mysterious nebula in the direction of the constellation Camelopardalis a diameter of 12.8 parsecs. Sh 2-210 lies behind the far eastern end of Cam OB1, the largest OB association, which stretches 17 degrees in longitude from 151° all the way to 134°. 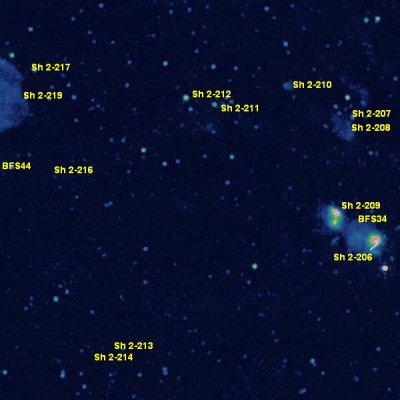 Cam OB1 and the related Camelopardalis molecular cloud complex, lie at a distance of 800 to 1000 parsecs. They mark the outer boundary of our local galactic region, the Orion spur, just as similar molecular clouds in Auriga, Gemini, Monoceros and Canis Majoris mark this boundary east of the Auriga gap.

Sh 2-206 (NGC 1491) is an older, evolved HII region ionised by the O5 star BD +50 886 [12] and bright at hydrogen-alpha, radio and infrared frequencies. You can see a good image of this nebula in visible light here which shows the bubble formed around the central star.

2. ^ Leahy, D. A. 2002, Journal of the Royal Astronomical Society of Canada, A Multi-Wavelength Study of the H II Region Sharpless 217

8. ^ Russeil, D. 2003, Astronomy and Astrophysics, Star-forming complexes and the spiral structure of our Galaxy