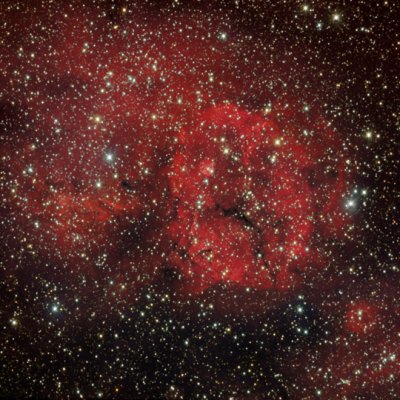 Sh 2-284 is a group of several HII regions ionised by members of the star cluster Dolidze 25 in the Milky Way's Monoceros arc.

This sector provides a window into the Milky Way's Outer Arm region as well as containing an unusual large and cold molecular cloud complex with little visible star formation.

Russeil concludes that Sh 2-283, Sh 2-284, Sh 2-285 and Sh 2-286 are all part of the same star formation region at a distance of 7890 ± 290 pc. [3] These HII regions thus appear to form a significant arc in the Milky Way's Outer Arm region. There seems to be no name for this arc in the scientific literature. I suggest "the Monoceros arc" as all of these nebulae are located in the constellation Monoceros.

The brightest of these nebulae at radio, hydrogen-alpha and infrared frequencies is Sh 2-284 (LBN 983), which is ionised by the star cluster Dolidze 25. Avedisova gives a lower distance estimate of 5200 ± 800 pc for Sh 2-284. [1] Detailed images of this large object show that it also contains a number of smaller HII regions.

Dolidze 25 is surprisingly understudied for an important Outer arm ionising cluster. It does not appear in Kharchenko's cluster catalog. [4] Moffat, Fitzgerald and Jackson list 5 ionising stars: 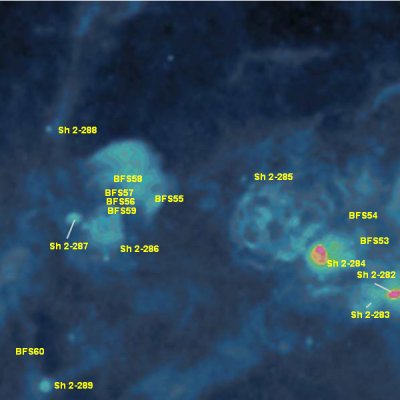 This hydrogen-alpha image shows the major nebulae in this sector. 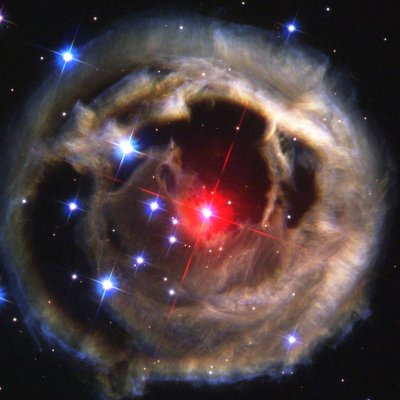 In January 2002, one component of the previously unknown binary star V838 Mon (217.7975°, +1.0522°) suddenly expanded rapidly into an enormous cool supergiant, increasing its luminosity 10 thousand times and temporarily becoming the brightest star in the Milky Way. Light from the star illuminated dust clouds previously released from the system, creating a spectacular and rapidly changing light echo observed by the Hubble space telescope. The star system, which also includes a B3 V class companion and is surrounded by a sparse star cluster, is believed to lie at a distance of 6100 ± 600 pc, placing it in the Milky Way's Outer Arm region. [20], [21]

This sector contains GAL 216-02.5, an unusual large cold molecular cloud with no visible star formation. Often called the Maddalena cloud, this object was first described by Maddalena and Thaddeus in a 1985 paper and is prominent at microwave frequencies. The original paper estimated a distance of 3000 pc, implying a size of 250 x 100 pc, and containing from 700 thousand to 1.1 million solar masses of gas. [22] A follow-up paper in 1996 suggests that this cloud may be part of a larger molecular complex including Sh 2-287 and reduces the parameters to a distance of 2300 pc containing about 340 thousand solar masses of molecular gas. Even this lower estimate makes it one of the most massive molecular cloud complexes in the solar neighbourhood. [23] 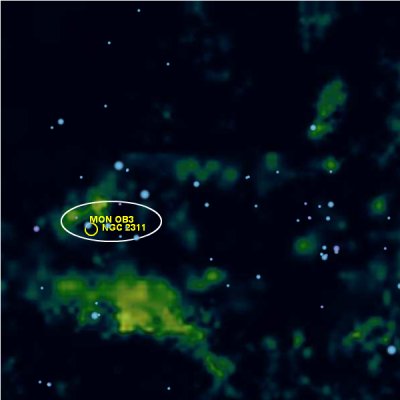 11. ^ Green, D. A. 2004, Bulletin of the Astronomical Society of India, Galactic supernova remnants: an updated catalogue and some statistics. and here for the most current version of this supernova remnant catalog.

15. ^ Russeil, D. 2003, Astronomy and Astrophysics, Star-forming complexes and the spiral structure of our Galaxy

34. ^ Humphreys, R. M. 1978, Astrophysical Journal Supplement Series, Studies of luminous stars in nearby galaxies. I. Supergiants and O stars in the Milky Way. and the unpublished catalogs available here.