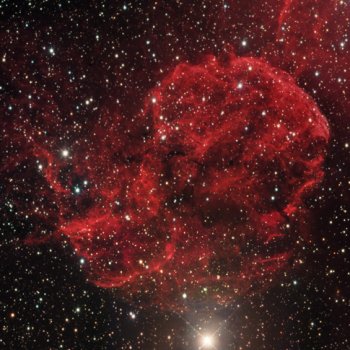 The Jellyfish supernova remnant is about 12,700 years old and is part of the Gem OB1 association, which is located about 1500 to 2000 parsecs away in the outer galaxy.

The Jellyfish supernova remnant (SNR 189.1+03.0, Sh 2-248, IC 443) which appears within the molecular clouds surrounding the Gem OB1 association, is one of the most prominent objects in this direction, which is usually considered to be relatively empty. Nevertheless, there are many interesting objects in this sector, including the star cluster Messier 35, a flaring neutron star, and what may be the closest O-star to our solar system. Messier 1 (SNR 184.6-5.8, Sh 2-244), the famous Crab nebula supernova remnant, is also located well below the galactic plane in this direction.

Flavia's star, the double star system HD 245770 (LS V +26 5), which is believed to lie at a distance of about 2000 parsecs, and is visible in the direction of the eastern edge of the Simeis 147 (Sh 2-240) supernova remnant, has been intensely studied by astronomers. The brightest visual component is an O9.5IIIe giant, but what has attracted most of the attention is its companion, which appears to be a neutron star with an orbital period of 110 days. Bright X-ray bursts are occasionally observed from the neutron star, and these may be caused by material falling inwards from an accretion disk of gas and dust surrounding the star. [1]

The recently re-reduced Hipparcos catalog simply deepens the mystery as the new parallax for HIP 28711 is given as 9.19 mas (with an error of 2.85 mas). This makes the star even closer (109 parsecs). [7] (data accessed through Astrogrid).

There is little or nothing visible at the location of Sh 2-243 (LBN 830) at visible frequencies on the DSS2 or IPHAS plates, or at infrared or radio frequencies either. BFS do not give a distance estimate for Sh 2-243 because they detect two quite different velocities in the carbon monoxide gas in this direction. [10] Russeil gives an estimate for the distance to Sh 2-243 as 2000 parsecs [14], which seems compatible with the prominent molecular cloud mapped in this direction and displayed in Figures 1 and 2 of a Japanese study of this region. [9] There is little in the scientific literature beyond these references, so all that can be concluded is that it is unclear what Sharpless originally detected but there is definitely a significant molecular cloud in this direction visible in microwaves. Having said that, the Avedisova catalog does associate Sh 2-243 with a star formation region that also includes the reflection nebula DG 68 = [SS62] 45, a hydroxyl maser, the infrared source IRAS 05363+2317 and several radio sources. [Avedisova 1809]

Westerhout detected a radio source (W11) just south of Sh 2-243, but his notes say "probably 0-line error" [15], and there is no obvious object in this direction. 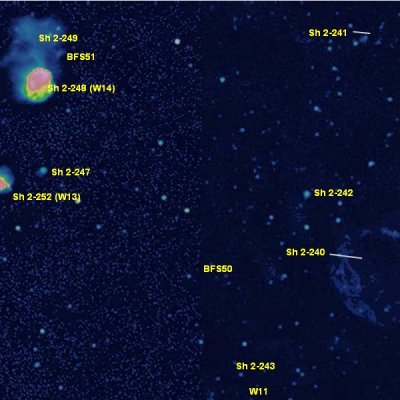 The galactic plane between these nebulae and the Gemini molecular clouds seems empty, with only the tiny nebulae BFS48, BFS49 and BFS50 lighting the void. Not much is seen in this region of the galactic plane at infrared, radio or microwave frequencies. There is an intriguing hint of a large circular nebula in WHAM hydrogen-alpha, visible in the Galactic Plane Explorer around (184.3°, 0.75°) with the brightest spot near the infrared source IRAS 05553+2642 [Avedisova 1803], but this does not show up in the more detailed IPHAS hydrogen-alpha images, so this clearly needs more investigation.

Commenting on the emptiness in this sector, S.W. McCuskey wrote

No evidence exists among the OB stars for a spiral arm beyond the local concentration in which the sun is embedded. [19]

A detailed study of this high velocity gas comes to quite a different conclusion - that this gas is from high velocity clouds, perhaps originating from the Milky Way's halo, which are crashing through the galactic disk because of gravitational attraction. [21] It seems that the emptiness of the outer galaxy gives us a clear view of a vast cosmic meteor shower.

Brighter stars start to appear again in the eastern part of the sector, which is dominated by a complex of molecular clouds surrounding the Gem OB1 association. 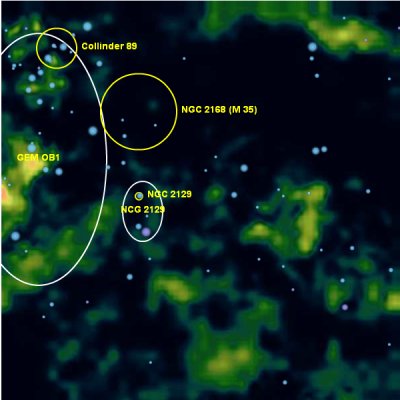 The Gem OB1 molecular clouds are the moist prominent objects in this microwave image, which also shows the major ionising stars, clusters and associations in this direction.

Avedisova lists HD 42088 as one of the ionising stars of Sh 2-252 [3], which is commonly called the Monkey Head nebula. Sh 2-252 appears to surround the star cluster NGC 2175.[31] However, Kharchenko lists no star cluster in this direction [22] and a 2005 paper separates the stars in this direction into 10 distinct groups with distances ranging from 410 to 8100 parsecs. [32] So NGC 2175 may not be a real star cluster. Fountain, Gary and O'Dell argue that HD 42088 alone can explain almost all the ionisation seen in the nebula. They explain the dynamics of the region as a double blister created by molecular gas ionised by HD 42088 and suspended between two or possibly three larger clouds of neutral atomic hydrogen. [33] Felli and colleagues seem to disagree, however, stating that HD 42088 can only explain about half the ionisation observed in the region near the radio source Sh 2-252 B, for example, and that less visible embedded stars must be responsible for the rest. [34] A later study concludes that the main ionising star for Sh 2-252 B is the B1V class LSV +20 16. [35]

The Jellyfish supernova remnant appears to be about 12,700 years old [41]. It is located at a distance of about 1500 parsecs [42] and has a complex 3-shell structure [39]. Parts of this structure are bright in X-rays and one of the shells may be associated with a second, much older supernova remnant. [43]

4. ^ Deharveng, L., Zavagno, A., & Caplan, J. 2005, Astronomy and Astrophysics, Triggered massive-star formation on the borders of Galactic H II regions. I. A search for ``collect and collapse'' candidates

14. ^ Russeil, D. 2003, Astronomy and Astrophysics, Star-forming complexes and the spiral structure of our Galaxy

15. ^ Westerhout, G. 1958, Bulletin of the Astronomical Institutes of the Netherlands, A survey of the continuous radiation from the Galactic System at a frequency of 1390 Mc/s

18. ^ Trimble, Virginia 1973, Publications of the Astronomical Society of the Pacific, The Distance to the Crab Nebula and NP 0532

25. ^ Humphreys, R. M. 1978, Astrophysical Journal Supplement Series, Studies of luminous stars in nearby galaxies. I. Supergiants and O stars in the Milky Way. and the unpublished catalogs available here.

26. ^ Negueruela, I. & Marco, A. 2003, Astronomy and Astrophysics, Stellar tracers of the Cygnus Arm. I. Spectroscopic study of bright photometric candidates

28. ^ Fesen, R. A. 1984, Astrophysical Journal, The nature of the filaments northeast of the supernova remnant IC 443