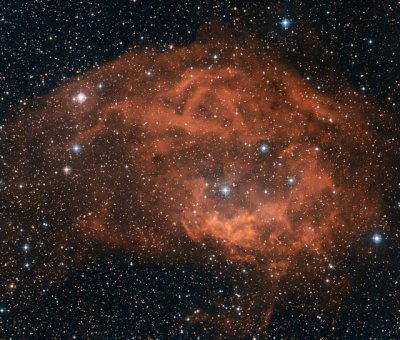 Lower's nebula (Sh 2-261) is located near the edge of the constellation Orion the Hunter.

The Ori OB1 association and its surrounding molecular clouds are located far below the galactic plane and will be discussed in a future commentary on our local system of stars, the Gould Belt. The constellation Orion the Hunter does extend into the galactic plane in this sector, however. The Gem OB1 molecular clouds are partly in Orion, as are Lower's nebula (Sh 2-261) and numerous other interesting objects between 200° and 190°.

The Sh 2-254 to Sh 2-258 complex is embedded in a 27 thousand solar mass molecular cloud, with much of the mass concentrated in a central core located between the two bright nebulae Sh 2-255 (IC 2162) and Sh 2-257. [1] The best available overview of this complex is given by Chavarria and colleagues in a preprint based on Spitzer observations. [2] Russeil gives the distance to the complex as 2460 ± 160 parsecs [3], which is compatible with the Avedisova estimate of 2500 ± 400 parsecs. [4] Moffat, Fitzgerald and Jackson give as ionising stars:

The Avedisova catalog lists 80 components in the star formation region associated with the Sh 2-254 to Sh 2-258 complex, including 11 masers. [Avedisova 1858] 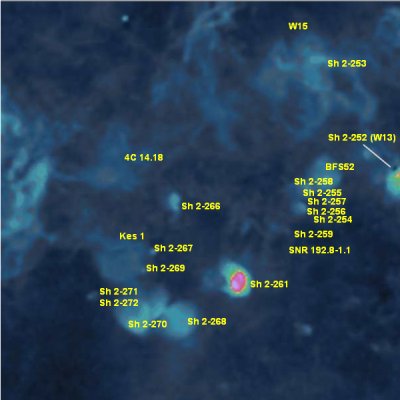 This hydrogen-alpha image shows the most prominent HII regions and supernova remnants in this sector, including Lower's nebula (Sh 2-261) and the Sh 2-254 to Sh 2-258 complex.

The HII region Sh 2-261 is often called Lower's nebula because it appears on a photographic plate taken by the father-and-son team of Harold and Charles Lower in 1939. The Lowers were amateur astronomers, accomplished telescope makers and pioneering astrophotographers from San Diego, California. Harold Lower published a pamphlet in 1939 describing an 8 inch Schmidt camera that he and his son had constructed several years previously. He notes that the camera has been especially useful in photographing what are now called HII regions:

Another field which we have found interesting is searching for diffuse galactic nebulae which photograph strongly by red light. By the use of red-sensitive film and a deep red filter we have been able to photograph a number of nebulae which are exceedingly faint on blue-sensitive negatives. [19]

Sh 2-253 is well above the Gem OB1 molecular clouds. It is most visible in hydrogen-alpha (although a faint "rim" is also visible at radio frequencies [23]). Several papers have concluded that it is ionised by stars found in the cluster Bochum 1. [4], [5] The cluster Alessi 58 = DSH J0625.7+1954 is also located nearby. [24] Neither Bochum 1 nor Alessi 58 occurs in the Kharchenko catalog of confirmed bright star clusters, however. [25]

The radio source W15 that appears northeast of Sh-253 probably does not exist. Westerhout noted "probably 0-line error" in his catalog. [27] 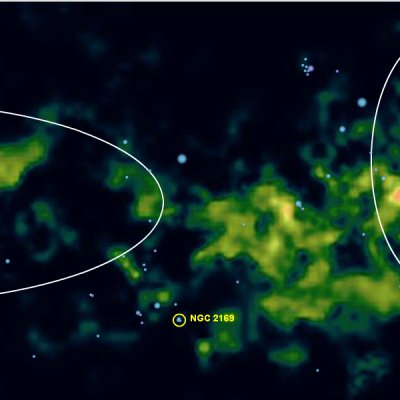 Sh 2-267 is sometimes misidentified as a planetary nebula. In fact, it is an HII region containing the infrared cluster [BDS 2003] 81 at a distance of 3500 parsecs. [29] Lahulla gives a slightly larger distance estimate of 4500 pc and says that the nebula is ionised by an O9V star. [30]

Sh 2-269 lies in front of a 8700 solar mass giant molecular cloud at a distance of about 3800 pc. It is bisected by a dust lane and is ionised by two stars in the western side of the nebula. One is a B0.5 V star, the other is visible only in the infrared and appears to be either O8 or O9.5. [35] The western side of the nebula contains an infrared cluster with at least 79 stars. [36] The Avedisova catalog [Avedisova 1878] lists 15 components for this nebula, including 3 masers, the infrared source IRAS 06117+1350 and the Herbig-Haro object HH 191.

There are several mysterious radio sources visible in this direction, including Kes 1 and 4C 14.18. Not much appears in the scientific literature about either source.

10. ^ Russeil, D. 2003, Astronomy and Astrophysics, Star-forming complexes and the spiral structure of our Galaxy

12. ^ Deharveng, L., Zavagno, A., & Caplan, J. 2005, Astronomy and Astrophysics, Triggered massive-star formation on the borders of Galactic H II regions. I. A search for ``collect and collapse'' candidates

27. ^ Westerhout, G. 1958, Bulletin of the Astronomical Institutes of the Netherlands, A survey of the continuous radiation from the Galactic System at a frequency of 1390 Mc/s