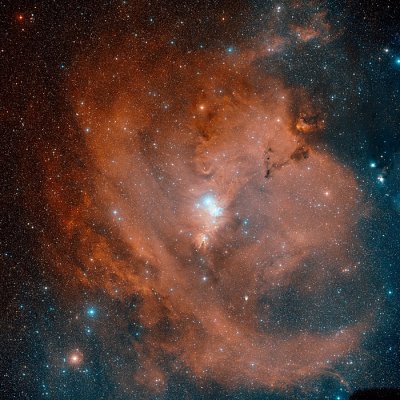 This sector contains two major OB associations, each with its own complex of molecular clouds - Mon OB1 and Mon OB2, as well as Plaskett's star, one of the most massive binary star systems known in the Milky Way.

BFS give a distance estimate of 800 pc for Sh 2-273, the nebula ionised by NGC 2264. [6] Sh 2-273 is often called the Fox Fur nebula because of the mottled appearance of the nebula near the central cluster.

Sh 2-273 also contains the famous Cone nebula, a pillar of gas and dust containing the infrared source [MRC90] IRS E] embedded in a Bok globule at its tip. [7] The infrared source IRAS 06384+0932 (Allen's source, NGC 2264 IRS 1), which appears to be a hot B-class star about 3500 times more luminous than our Sun [8], is located just beyond the tip of the Cone nebula and may be creating a stellar wind that energises and shapes the nebula. [9]

This microwave image shows the main complexes of molecular clouds in the sector as well as the ionising stars, clusters and associations.

The reflection nebula NGC 2261, often called Hubble's Variable Nebula, is found at (203.751°, +1.277°), southeast of [LPH96] 201.663+1.643. The famous US astronomer Edwin Hubble reported that this nebula appeared to change its shape in a series of photographs taken over 8 years. [14]. It is now known that these changes are actually caused by variations in the variable star R Mon, which illuminates the nebula. R Mon is a very active class B0 Herbig star with a thick accretion disk, jet outflows and an orbiting companion star. It appears to be located at about the same distance as the Mon OB1 molecular clouds. [15]

Two supernova remnants lie to the east of the Mon OB1 molecular clouds, SNR 205.5+0.5 (the Monoceros Loop) and SNR 206.9+2.3 (AJG 5). One set of distance estimates suggests that the Monoceros loop is located along with Mon OB2 on the near side of the Perseus arm at about 1600 pc, but AJG 5 is much further away, 6900 pc, a distance usually associated with the Outer arm. [17] 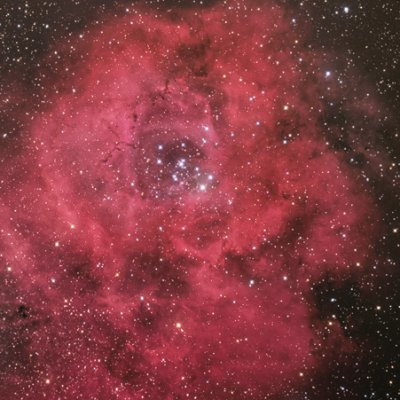 The Rosette nebula is ionised by the young massive star cluster NGC 2244.

The only comprehesive study published to date on the Rosette molecular clouds surrounding the Mon OB2 association is a 1980 paper by Blitz and Thaddeus. They divide the clouds into 10 complexes with a total of about 130 thousand solar masses of molecular gas and estimate the distance to be 1600 pc. [18] A follow-up study published in 1998 by Schneider and colleagues presented more detailed observations of part of the Rosette molecular clouds and some embedded infrared sources. [19] 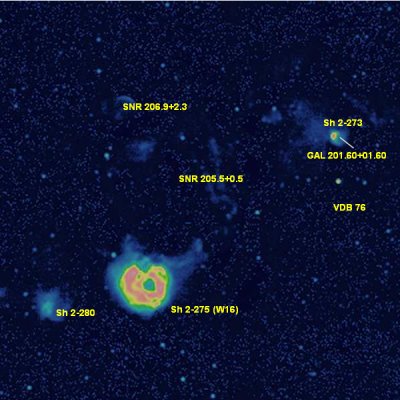 The Rosette nebula (Sh 2-275, W16) is the most prominent object in this radio image.

NGC 2244 ionises the famous Rosette nebula (Sh 2-275, W16). This HII region is a blister at the northwest end of the Rosette molecular clouds and has largely destroyed the molecular gas surrounding it, with only a small clump ([BT80] H) remaining. [18]

An infrared study of the Rosette molecular clouds found 7 embedded star clusters other than NGC 2244. At least three of these clusters may have been triggered by the ionisation front associated with NGC 2244 and the Rosette nebula. [21]

2. ^ Humphreys, R. M. 1978, Astrophysical Journal Supplement Series, Studies of luminous stars in nearby galaxies. I. Supergiants and O stars in the Milky Way. and the unpublished catalogs available here.