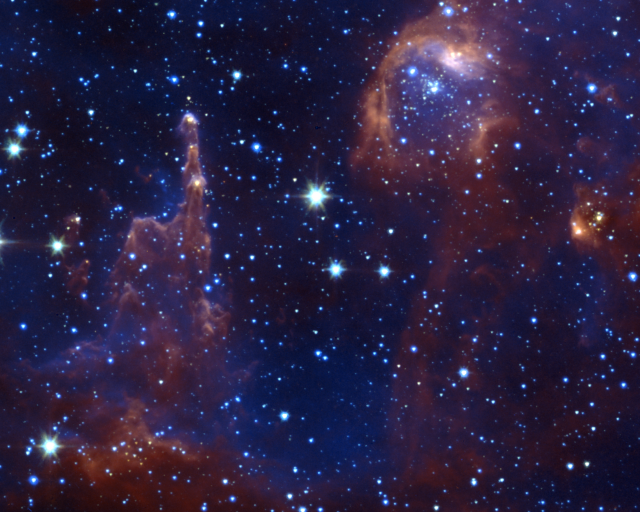 1280x1024 version The Moving Finger writes: and, having writ,
Moves on: nor all thy Piety nor Wit
Shall lure it back to cancel half a Line,
Nor all thy Tears wash out a Word of it.

Finger-like pillars are common in massive star formation regions. This one in Sh 2-284 seems so stark and mysterious against the background of cold ionised gas that fills the central cavity that it reminds me of the famous lines of FitzGerald's Rubaiyat.

Sh 2-284 is a major star formation region ionised by the star cluster Dolidze 25 and believed by most authorities to lie in the Milky Way's Outer arm.

Celestial north is to the right.

This is a five colour composite image. One colour (light blue) is assigned to the SuperCOSMOS hydrogen-alpha data and four colours to data from the channels of the Spitzer infrared telescope IRAC instrument (channel 1: bright green, channel 2: yellow, channel 3: orange, channel 4: red). The Spitzer data for this region is described in a 2007 paper.

You can also see an image for the larger star formation region here.