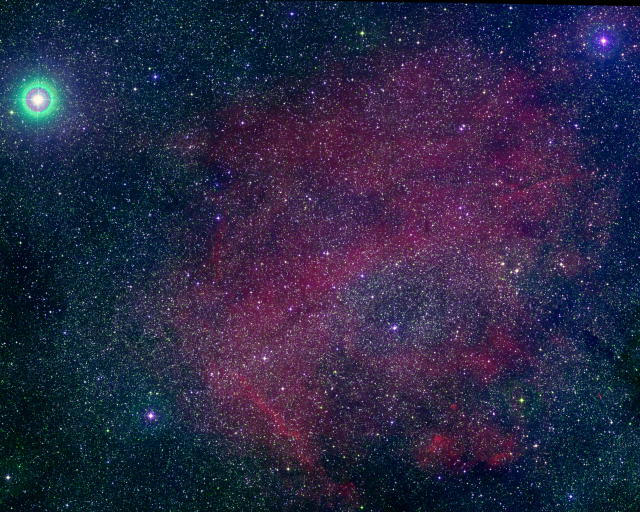 1280x1024 version While writing my Hydrogen-alpha commentary I noticed a prominent area of hydrogen-alpha emission in the SHASSA data for a region in the constellation Scutum, surrounding galactic coordinates (21.3°,1.2°), which was not in the Sharpless, RCW and Gum catalogs. A check with SIMBAD and a more tedious review of the scientific literature turned up nothing. It appears that I had discovered an overlooked nebula!

The nebula surrounds the O5e star HD 169582 making it plausible that this is the ionising star.

Unlike asteroids and comets, there is no clear procedure for reporting newly discovered nebulae and in any case, these days such nebulae tend to be given obscure names like "HII region G21.3+1.2". So it is not likely that I'll end up with my name in the sky. Still, it's nice to think that one of the side effects of my long Galaxy Map adventure may have been to discover something new. Dr. Parker is currently checking to verify whether this is indeed an original discovery and I'll report the outcome here when it is available.

The image above is a false colour SuperCOSMOS image (hydrogen-alpha: red, blue: blue, infrared: green) of this overlooked object. The prominent star to the upper left is the G9 IIIb giant Zeta Scuti and the ragged dark clouds at the bottom belong to the large dark nebula Barnard 97.

Addition in October 2013: in fact this nebula is [C51] 31 and was listed in a catalog by Georges Courtès in 1951. I don't think that this nebula was in SIMBAD when I originally checked but now it is.