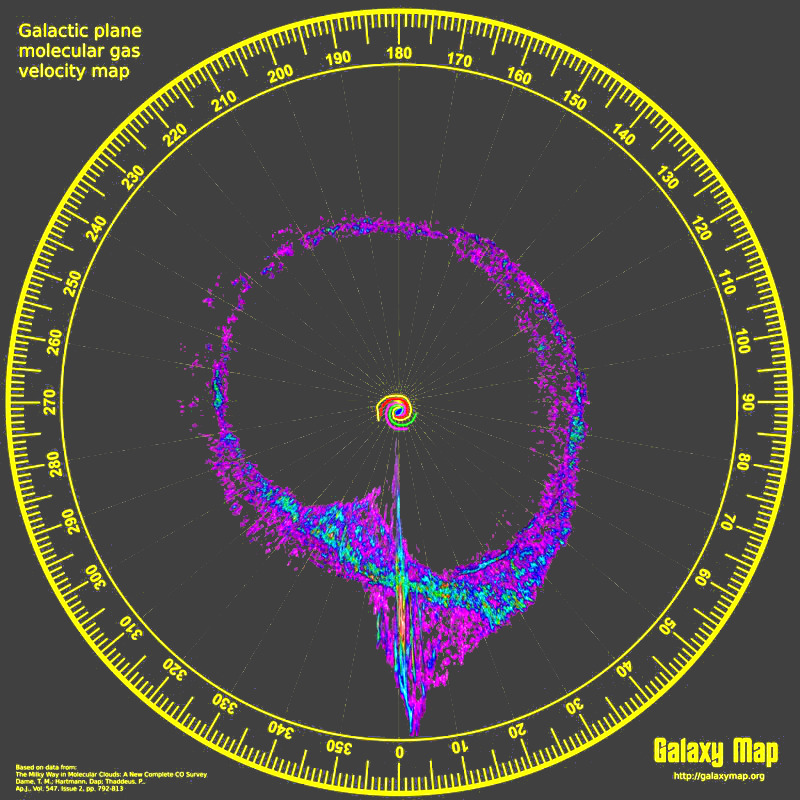 Download link: 9280x9280 (16.4 Mb) version
Warning - right click to download as the image is likely too large to view in your browser. For several decades, researchers, now at the Harvard-Smithsonian Center for Astrophysics, have been painstakingly carrying out a survey of the molecular gas in the Milky Way by measuring the position, temperature and velocity of carbon monoxide, the most visible component of molecular gas. They have combined their data with several other sources to form a partial equivalent (|b| atomic hydrogen. Compared to atomic hydrogen, molecular gas is less widespread, forms more distinct clumps, and is often colder, with the warmer molecular gas largely confined to the inner galaxy.

These spiral arms can be partially traced directly in the velocity data shown on this poster, especially in the outer galaxy. Negative velocity (approaching the Sun) appears as gas on the inside of the map, and positive velocity on the outside.

This image is dissected to show the warmer molecular gas that lies within the colder clouds. The colour shifts from magenta (0.5°K) to blue to green to red to light red (10 °K).

The poster also contains a circle giving longitude coordinates and a small reference schematic of the Milky Way showing the eight main components of the standard disk model (the four arms, the bar, the far and near 3kpc arms and the Orion spur). The reference image is aligned to allow direct comparison with the velocity map at the same longitudes.

You can also view the image only and a version that shows only the outer shell of cold molecular gas (0.5 °K).