I've added two new chapters to the Our Galactic Region book. These are a description of the basic plan of the Milky Way and an explanation of several techniques that astronomers use to estimate distances, Surveying the Galaxy.

I never had a basic plan description for the Milky Way before on this site because I assumed that this kind of information is widely available elsewhere. But a look around the Web showed that this was not really true and much of the information that was available was incorrect or outdated. (It doesn't help that astronomers cannot even agree on the names of the spiral arms and so many people get the impression that there are more spiral arms than there really are.)

During the big Herschel science conference in early May, I blogged about the issue of data access, complaining (perhaps a bit unfairly) that we will have to wait at least another year for the full results of the Hi-GAL survey of the inner galaxy.

According to the Hi-GAL schedule given here, we can expect to see the "start of incremental releases" of the Hi-GAL "maps in 5 bands" about 24 months after Herschel's launch (that is, May 2011).

It is therefore interesting to see that the full five band data for four Hi-GAL tiles (all dated January 2010) are already publicly available from the Herschel archives.

It looks like this new data also points to a wealth of new scientific discoveries.

As just one example, here is an image based on Herschel's longer wavelength SPIRE instrument centred at 303.75°. I created this image from SPIRE's 500 μm (red), 350 μm (green) and 250 μm (blue) bands. SPIRE is sensitive to submillimetre wavelengths in frequencies where longwave infrared is merging into shortwave radio frequencies. 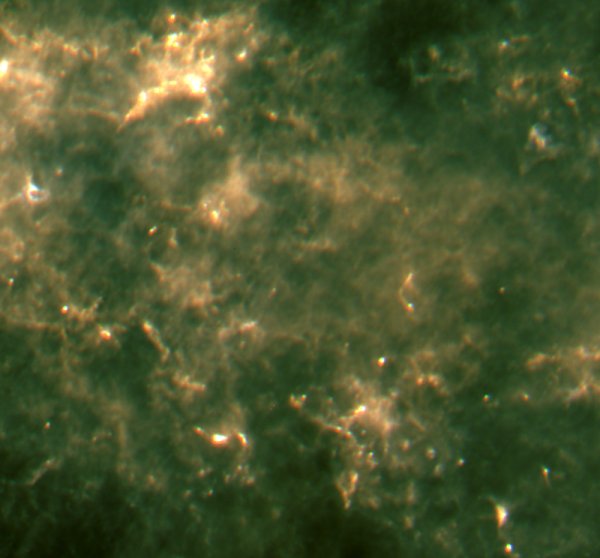 Compare this with the equivalent Spitzer image (seen here in the Milky Way Explorer): 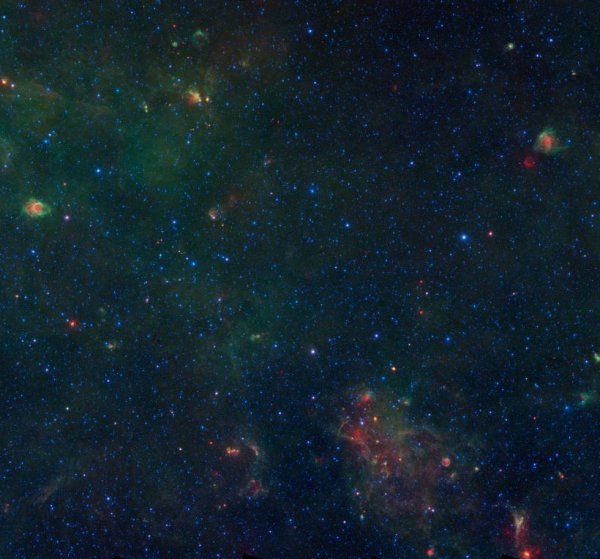 The most obvious difference is the large area of submillimetre emission surrounding the obscure infrared source IRAS 12578-6217. This is visible towards the upper left of the Herschel image. Interestingly, this object is not visible at longer wave radio frequencies, eg. in this SGPS image.

The presentations from the Herschel science conference last week are now available here:

and many of the related scientific papers are here:

As well, you can find news releases here:

Unfortunately the multiple Herschel websites are a confusing maze but hopefully those links will let you get right at the good stuff.

Here's another Herschel (Hi-GAL) vs. Spitzer (MIPSGAL) comparison. This time the image is closer to the galactic centre towards the constellation Aquila (about 30° galactic longitude).

Spitzer (can be seen in the Milky Way Explorer here): 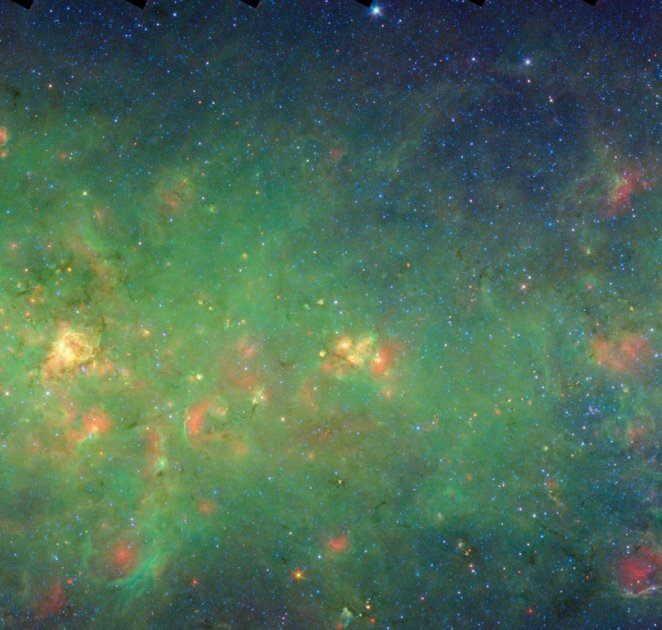 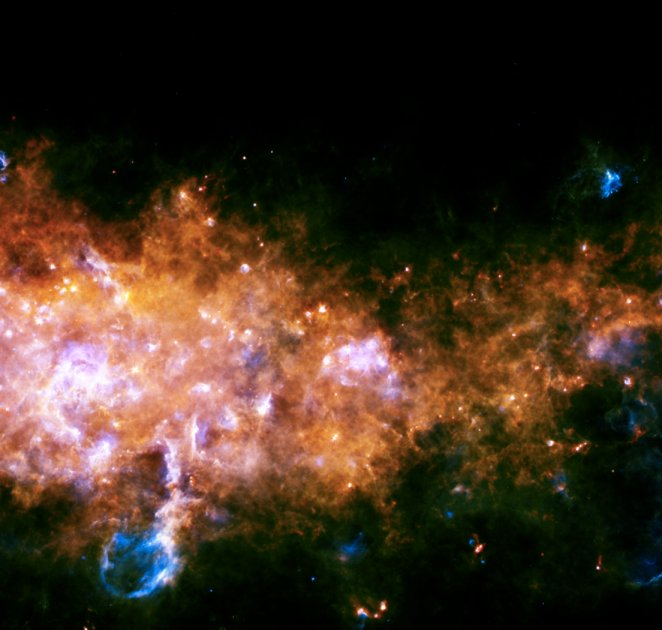 It should be noted that a significant reason for the differences in the Spitzer and Herschel images is the colour ranges and luminosity levels chosen by the people who rendered the data. If you copy these images and run histogram equalisation on them in a graphics program, you will see that the underlying data are more alike than is first apparent.

Still, there is no doubt that Herschel reveals more detail, especially in the colder dust, than Spitzer.

Perhaps the most exciting Herschel project mapping the Milky Way is the Hi-GAL survey of the inner galaxy. This is essentially redoing the Spitzer GLIMPSE/MIPSGAL survey but with greater sensitivity, different wavelengths and in more detail.

The Herschel scientists released a large amount of preliminary data today, including a large swath of the Milky Way in the direction of the constellation Vulpecula as imaged by Hi-GAL. This gives us the opportunity to directly compare the Spitzer and Herschel results.

Here's a Spitzer MIPSGAL image centred around the galactic plane at 59.5°: 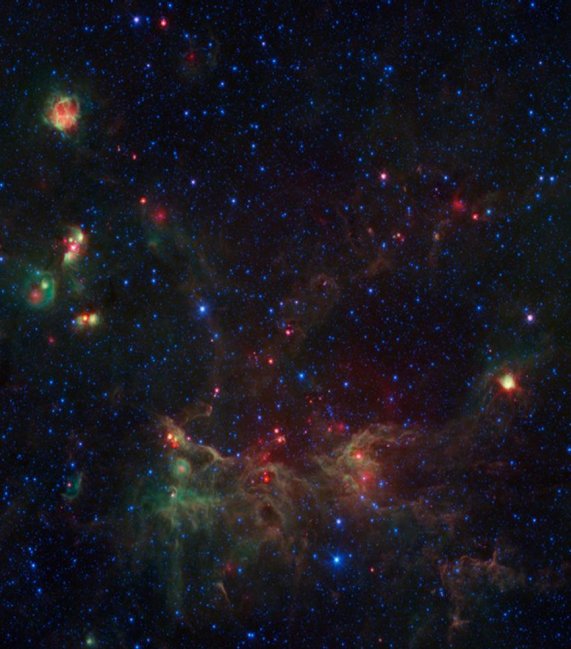 You can see this image in the Milky Way Explorer here. 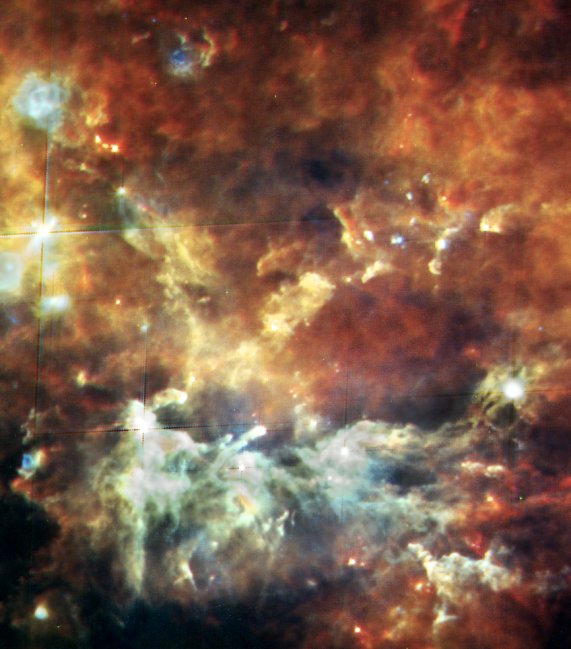 Of course this rendering of the Herschel data is deliberately overexposed to show the fine detail in the cold dust. The final Hi-GAL dataset will have thousands of luminosity levels and will be able to be rendered in multiple ways.

These results are very exciting - they confirm that Herschel's greater sensitivity will reveal a lot more fine detail in the Milky Way. The full Hi-GAL survey is scheduled to be released in about a year.