There are many astronomers who have contributed to our knowledge of the Milky Way over the past hundred years but for me one of the most fascinating is Colin Stanley Gum.

Gum is perhaps most famous for his discovery of the Gum Nebula, a vast expanse of nebulosity that may be one of the closest supernova remnants to our solar system. The Gum nebula is just one of 85 nebular complexes catalogued in Gum's pioneering catalog of HII regions visible in the southern Milky Way. Gum was also an early leader in the field of radio astronomy and his top rate mathematical skills played an important part in determining the exact location and orientation of the galactic plane and centre and in determining the current system of galactic coordinates.

For me, the most fascinating part of Gum's story was his persistence despite a lack of equipment and support from the management of the Stromlo observatory where he worked. His thesis advisor, Clabon "Cla" Walter Allen, left for a new position at University of London Observatory, and the Stromlo director, Richard Woolley, had little interest in his work and at one point even attempted to reject his thesis and deny him a PhD. If it had not been for the intervention of Ben Gascoigne as described here, Woolley might have succeeded in terminating the career of one of Australia's most prominent astronomers.

There are tiny details that suggest a dramatic story but these are mostly tantalising hints. Gum reported that the nebular spectrograph originally used by Gum and Allen was destroyed by one of Stromlo's periodic forest fires, and he was forced to depend entirely upon tiny photographs from a 100 mm (4 inch) Schmidt camera salvaged from the flames. Gascoigne mentioned that Gum "had to go into hospital for medical treatment" after he had written his thesis and there is a reference in a Stromlo history that this was because of a "nervous breakdown". This is a rather vague term. Perhaps it was clinical depression? In any case, Gum was able to recover from the incident and continue his career.

I came across some biographical details today that make Gum's story even more poignant: this genealogical data shows that Gum's father, Stanley Sturt Edgar Gum, died the year his son was born.

Curiously, I have not been able to find a single photograph of Colin Gum on the Internet, but since his father served in the Australian infantry during the first World War, Stanley Sturt Edgar Gum's portrait can be found here.

I wish that someone would write the biography of Colin Gum that he so richly deserves. I think that his enormous achievements despite immense obstacles would be a great inspiration for many young scientists today.

An important part of a Gum biography would be his relationships with the two Stromlo directors during his all-too-short career: Richard Woolley and Bart Bok.

Richard van der Riet Woolley was best known for his sarcastic sense of humour and his sometimes spectacularly bad scientific and technical judgement. In 1947, when asked where he thought radio astronomy would be in 10 years, his response was "forgotten". He also remarked that the idea of space travel was "utter bilge" and wrote that "The whole procedure [of shooting rockets into space]...presents difficulties of so fundamental a nature, that we are forced to dismiss the notion as essentially impracticable".

It is odd that Bart Bok asked Gum's younger colleague Alex Rodgers to lead the effort to create an expanded version of Gum's catalogue, which became the RCW catalogue. Gum's equivalent in the northern hemisphere, Stewart Sharpless, produced an expanded version of his own original catalogue. Why was Gum not asked to do the same? Perhaps Gum himself wanted to move on to other projects? Certainly Bok's respect for Gum's scientific credentials seems clear from Bok's moving obituary for Gum, published after Gum's tragic death in a Swiss skiing accident in 1960.

As part of the annual meeting of the American Astronomical Society, NASA released today the most detailed ever infrared image of the Cygnus X region.

The mysterious Cygnus X region is the closest major star formation region to our solar system. It dwarfs the more local star formation regions in the Gould Belt such as Sco OB2 and the Orion molecular clouds. At visual frequencies Cygnus X is obscured by the Rift dust clouds. It was originally detected at radio frequencies and now a team led by Harvard astronomer Joseph Hora has revealed its full glory using infrared images from the Spitzer space telescope.

Hora tells me that astronomer-illustrator Robert Hurt helped to create the image. It is based on data collected before Spitzer ran out of coolant and combines four infrared frequencies.

Up to this point, the most detailed Cygnus X image available was this one from MSX (the Spitzer image is rotated roughly 90 degrees to the MSX image). I'll add the new Spitzer image to the Milky Way Explorer in the near future.

I blogged about the distance to Cygnus X in November 2010 and noted that there was a controversy about whether the objects in this direction are really part of a single region. A recent paper uses radio parallax measurements to establish that there is indeed a single major star formation region in this direction and like our own Gould Belt, it is part of the Orion spur.

The infrared image is centered upon the compact starburst cluster and OB association Cyg OB2, which has created a huge bubble in the interstellar medium. The radio parallax study shows that many other objects in this direction and at a similar distance have motions different from the expanding bubble surrounding Cyg OB2 and so probably developed independently from Cyg OB2 within the same gigantic molecular cloud.

Hundreds of new visitors have arrived at Galaxy Map over the past few days looking for a map showing the location of the newly discovered Earth-like planet Kepler-22b and its G5V class parent star Kepler-22. I've never seen this kind of response to a news story before - usually traffic spikes are caused by other sites like Astronomy Picture of the Day linking to Galaxy Map. In this case the traffic spike has come from hundreds of people independently searching for a map.

The poster is here:

The poster is based on these resources:

Basic plan of the Milky Way:

Below is an image of Sh 2-284 I made this morning from the WISE data. The speed of the image server is now reasonably fast - I think the problem yesterday was just that it was down for a while.

I used all four channels, using the equations:

with a bit of preprocessing of the individual channel FITS files using Aladin first.

I've rotated the image to the right by 90° to compare it with an earlier image I made using Spitzer IRAC and SuperCOSMOS data.

and here's the earlier Spitzer/SuperCOSMOS image for comparison: 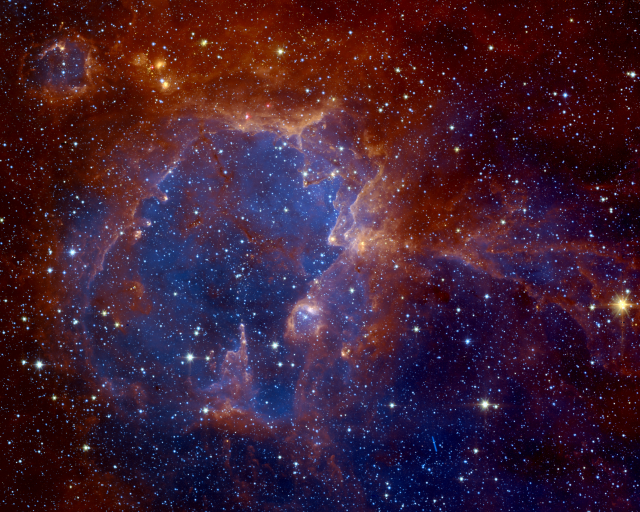 The two obvious differences are that:

It looks like the WISE image server is going to be very useful and I'm looking forward to making more images!

The first block of WISE infrared data was released a couple of days ago and there is an explanation of how to access the images here. Unfortunately all that is provided is an (when I tried it) unbearably slow postage stamp image server.

There is nothing like the full pannable and zoomable maps available for other infrared missions such as IRAS or Spitzer GLIMPSE/MIPSGAL. This is a real shame as the WISE all sky data is crying out for a Google Sky like interface.

The first block of data is mostly confined to the inner galaxy with a few key bits of the Gould Belt (Orion/Ophiuchus) and the outer galaxy provided as well. You can see the release map here.

I understand that the lack of a more elaborate interface is partially a funding issue. I hope that some resources become available (Google or Microsoft are you listening?) by the time the full data is released next year.

In the mean time (and if the postage stamp server becomes more responsive) I hope to start doing the Gum/RCW/Sharpless catalog images in infrared.