As I mentioned in my article on determining galactic distances, VLBI radio astronomy parallax measurements are finally producing accurate distance estimates for important locations around the Milky Way, replacing the dodgy and unreliable kinematic and photometric estimates used in the past.

Last week, an international team uploaded a paper presented at the 10th European VLBI Network Symposium to the astrophysics archive, giving an estimate for the distance to W75N, an important region within the Cygnus X complex, which is believed to be the closest major complex of star formation regions to our solar system. The estimate is 1320 (+110/-90) parsecs, making it slightly closer than the 1500 parsecs I've been using for the Milky Way map on this site.

The same team intends to publish estimates for other objects within Cygnus X, which should finally determine whether Cygnus X is a real complex of massive star formation regions or simply many different star formation regions scattered at different distances in the line of sight. Recent research suggests that Cygnus X is real, but only parallax measurements will make this certain.

More on four arms vs. two

This NASA image of Messier 106 provides a good example of the difficulties involved in determining the number of arms in a spiral galaxy.

Messier 106 has two arms which are invisible at optical wavelengths but very visible at radio and x-ray frequencies.

I gave the Messier 106 example in a blog post last year but the image I linked to today tells the story a bit more clearly.

Thanks to Universe Today for drawing my attention to this image.

It's only been up for a few days and the Basic plan of the Milky Way chapter is already the third most referenced page on this site. Moreover, the bounce rate for that page is currently an amazing 0% according to Google analytics.

It obviously fills an important need.

There is another infrared observatory in orbit, however: WISE - which is imaging the entire sky. Next year the WISE team will release what is likely to be the first all-sky infrared survey in almost 30 years. (The Japanese AKARI all-sky infrared data was collected a few years ago but sadly has never been fully released.)

There are already several spectacular WISE images available, including an amazing view of the Heart and Soul nebula region in the Perseus arm.

To give you an idea of the huge advance WISE represents over previous surveys, here's a visual spectrum image of the group of three tiny Sharpless nebulae (Sh 2-192, Sh 2-193 and Sh 2-194) visible near the much larger Heart and Soul complex: 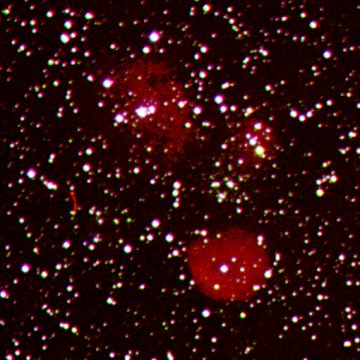 and here are the same nebulae in infrared (MSX on the left, WISE on the right). 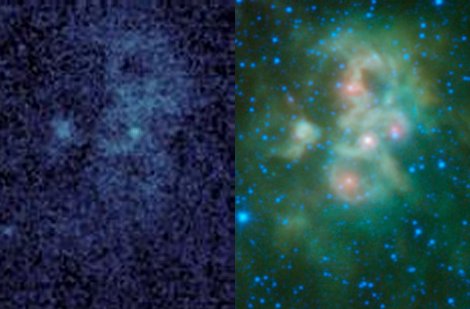 The WISE image suggests that the three nebulae are really part of the same object.

I thought that I would join the 21st century and add a Galaxy Map twitter feed:

You can also subscribe to my blog's RSS feed: