The Perseus arm and the RMS data

The Perseus arm may not be a single structure, as I discussed in a previous blog post. In this blog post, I discuss the evidence in the RMS data that the outer Perseus arm is actually a branch of the Norma arm and is not connected to the Perseus structure detected in the inner galaxy.

The image below is a detail of the overlay illustration from my first RMS blog post. The Milky War model from this site is overlaid by Robert Hurt's Milky Way illustration, which in turn is overlaid by the RMS data. The Perseus arm is in red, the Norma arm is yellow, and various smaller non-spiral structures are shown in orange. The RMS data shows complexes of massive young stellar objects and HII regions (blue circles) and individual objects (red circles). You can view a larger and more detailed version by clicking on the image. 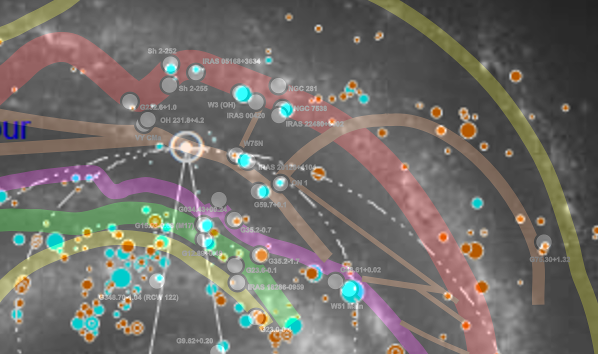 In the atomic hydrogen velocity data from the Leiden-Argentine-Bonn survey, there is a prominent structure that appears to lie between the Perseus and Norma arms in the first and second quadrants. I called this structure the Cygnet spur.

After Zhang, Reid et.al 2013 reported a gap in the Perseus arm between 50° < l < 80°, I re-examined the evidence for the Cygnet spur and suggested in a blog post that:

Instead of considering the Cygnet velocity structure as a spur, it may actually reveal that the outer Perseus arm branches off the Norma arm.

The RMS data provides more evidence for this branch.

In the image below, I have highlighted the two sections of the Perseus arm. 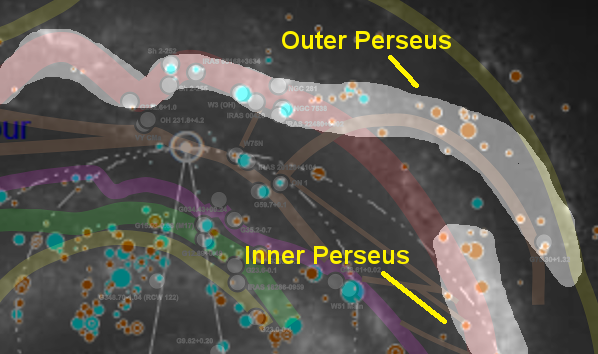 The RMS data shows a clear gap in the Perseus arm between 50° < l < 80°, with only one small source in this region, providing more evidence that this arm may not be a single structure. In contrast, the RMS data shows many large sources connecting the Outer Perseus arm to the Norma arm. This is also consistent with the hydrogen data and provides a better explanation for the hydrogen velocity in this direction than a spur.