Simple mathematical patterns are seductive. Our brains and in particular, our visual processing systems, are pre-programmed to see them everywhere, even if they do not exist. 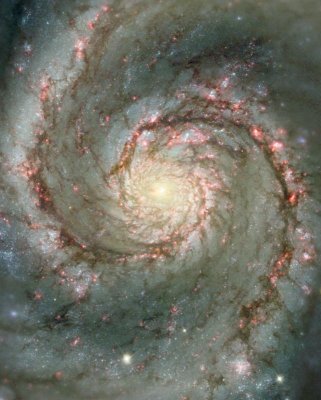 Disk galaxies are a good example. Hydrogen clouds, star formation regions and dust in disk galaxies often seem concentrated in prominent arms that are typically mathematically modelled using logarithmic spirals. However, a simple mathematical model, while tempting, can be actively misleading. If we carefully examine even grand design spiral galaxies such as the Whirlpool galaxy, Messier 51, shown to the right, we can see deviations from a simple spiral pattern, including shorter non-spiral arms, changes in arm thickness, and small "feathers" that connect the larger arms together.

It is often the deviations from a spiral pattern that are the most interesting features of a disk galaxy like the Milky Way.

This is why the RMS data discussed in my last two blog posts is so important. By providing distance estimates for HII regions and massive young stellar objects throughout the galaxy and well beyond what has been mapped using parallax alone, the RMS data provides the beginning of a real portrait of our home galaxy, revealing some of the unique features that are distinct from a mere mathematical model.

In this blog post I discuss what appears to be one of the most prominent deviations from spiral structure in the Milky Way: a vast structure in the inner galaxy that I've called the Peninsula.

I initially suggested the existence of the Peninsula when examining the mystery of RCW 122. RCW 122 is an enormous star formation region in the inner galaxy, especially prominent in images from the Spitzer infrared space telescope. The published radio parallax-based distance estimate of 3380 (-270 / +330) parsecs does not place it near any of the spiral arms or in the 3 kpc arms or bar.

When I examined the atomic hydrogen velocity data more closely, I suggested that a "peninsula" of hydrogen gas extended from the Norma arm towards the bar and that RCW 122 was part of this structure. 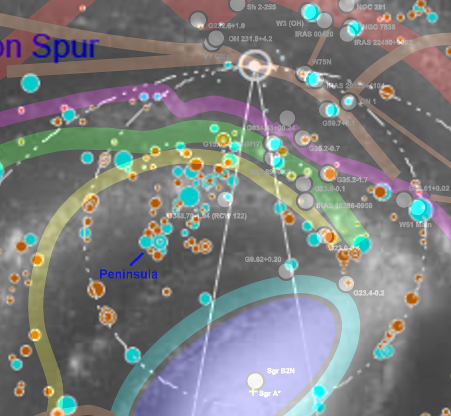 The RMS data suggests that the Peninsula is real and is larger and more prominent than I had imagined.

In the rough diagram at the end of my article on RCW 122, I had shown the star formation region at the end of the Peninsula. However, the RMS data suggests that the Peninsula is much larger than I had estimated and RCW 122 is located in about the middle of this vast structure extending from the Norma arm towards the galactic bar.

The illustration to the left is a detail of the larger overlay image from my first RMS blog post. The image shows the Milky Way model from this site overlaid by the Hurt illustration, which is overlaid again by the RMS data. The Norma arm is in yellow. The RMS data shows complexes of massive young stellar objects and HII regions (blue circles) and individual objects (red circles). You can view a larger and more detailed version by clicking on the image.

As I pointed out in my previous blog post, the Hurt illustration appears to be inaccurate in the fourth quadrant. I discussed the position of the Sagittarius arm in my last blog post. In the overlay illustration both the RMS data and my own Milky Way model suggest that the Norma arm is more substantial and further away from the galactic bar than shown in the Hurt illustration.