This large complex of HII regions is associated with the 6 million year old low metal star cluster Dolidze 25 and is one of the few relatively unobscured major star formation regions in the outer galaxy.

Russeil concludes the Sh 2-283 to Sh 2-286 are all part of one star formation region located in the Milky Way's Norma (Outer) arm. These nebulae are described in detail in the description of the Monoceros Arc (220° - 210°) sector in the Commentary on the Galactic Plane.

This region is associated with the star cluster Dolidze 25. [2]

A good recent article summarising Spitzer infrared observations of Sh 2-284 concludes that Dolidze 25 has a distance of 5500 parsecs and an age of 6 million years. [3] 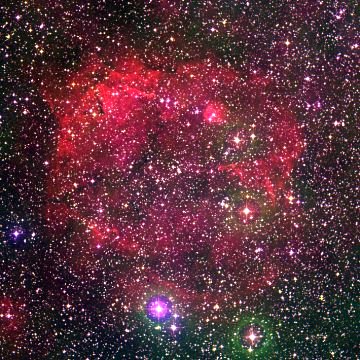