This is IC 4628, the Prawn nebula, which is a dense concentration of gas and dust ionised by the star cluster Trumpler 24. It lies within the more diffuse nebula RCW 113 surrounding the Sco OB1 association.

Avedisova says that the Prawn nebula is ionised by two O-class giants: HD 332417 (O6 III) and HD 152723 (O6.5 III). She places it in star formation region SFR 344.22+1.70 with 59 components, including 19 infrared sources, 8 masers, the emission star MCW 1264 and Trumpler 24. (Avedisova misspells the name of the emission star as MWC 1264, but this is clearly an error. The HD catalog gives a completely different location and spectral class for HD 332417 so it appears that Avedisova is mistaken in this case.)

This is a black and white hydrogen-alpha image of the Prawn nebula - much more colourful images are widely available on the Internet. You can also see several knots of young star development in this MSX infrared image.

Given the high concentration of O-stars in this direction and the prominence of the Prawn nebula at infrared and radio frequencies, it is surprising that this region has received so little study to date in the scientific literature. 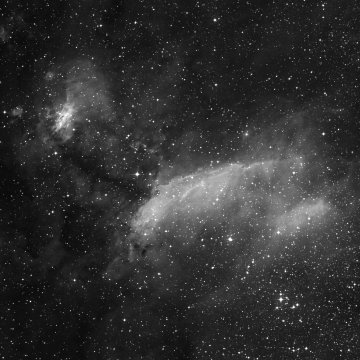