This is NGC 6334, the Cat's Paw nebula. This complex of HII regions contains one larger bubble (Gum 63) adjacent to three smaller bubbles (Gum 61, Gum 62 and Gum 64b) in addition to several other partially obscured nebulae and at least eleven major infrared sources that are probably mostly cooler B stars.

It lies at the same distance as NGC 6357, the War and Peace nebula, and is separated from it by a dark cloud. Both are near the Sco OB4 association in the Sagittarius arm.

You can see both nebula together in this image.

This nebula contains at least eleven major infrared sources that are probably mostly cooler B stars.[2]

At the same distance as NGC 6357 and separated from it by a dark cloud.[3]

There are many images of this spectacular nebula available online. One of the most interesting is from Dr. Travis A. Rector at the University of Alaska - Anchorage here. 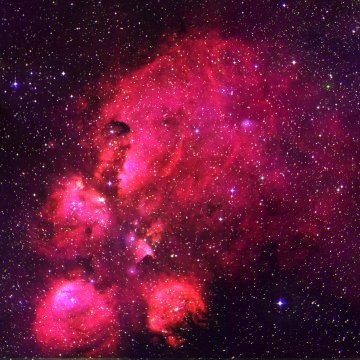