This HII region is ionised by the young NGC 6604 star cluster, which includes the O5-8V+O5-8V+O8I supergiant multiple HD 167971 and the radio source W 35. It lies, unusually, about 70 parsecs above the galactic plane within the Ser OB2 association.

Ser OB2 contains over 100 OB stars with a common age of about 5 million years.

The nebula is prominent at infrared frequencies as can be seen in this MSX image.

Sharpless describes a large region, so this nebula would be the large nebula, not just the small bright one within.

The nebula contains the infrared cluster [BDS2003] 9, which appears to ionise the tiny Gum 85 "egg" that appears within the larger Sh 2-54 "nest". The Bica et.al. catalog gives a distance estimate of 2600 parsecs for the infrared cluster, so it may be further away than Sh 2-54 itself. [3] 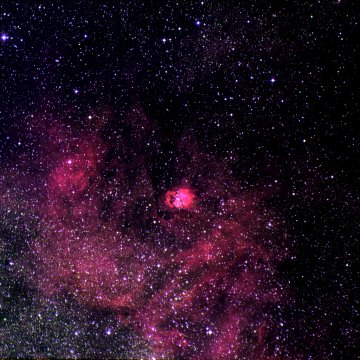