This is M 16, the Eagle Nebula. It is part of the W 37 molecular cloud and is ionized by the NGC 6611 star cluster, which is part of the Ser OB1 association in the Sagittarius arm. NGC 6611 is dominated by the massive and superhot O3.5V+O7.5V class multiple star HD 168076, which has 75-80 solar masses and provides about half the ionising radiation for the nebula.

There is a much better image of the Eagle nebula here. A region of M 16 was the subject of perhaps the most famous Hubble space telescope image, the 1995 Pillars of Creation.

You can find Spitzer infrared images of M 16 here. These images were analysed in a 2011 paper. [3] 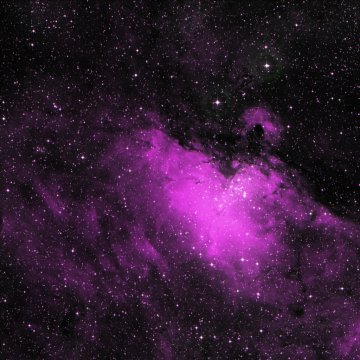