The HII region Sh 2-261 is often called Lower's nebula because it appears on a photographic plate taken by the father-and-son team of Harold and Charles Lower in 1939.

The Lowers were amateur astronomers, accomplished telescope makers and pioneering astrophotographers from San Diego, California. Harold Lower published a pamphlet in 1939 describing an 8 inch Schmidt camera that he and his son had constructed several years previously. He notes that the camera has been especially useful in photographing what are now called HII regions:

Another field which we have found interesting is searching for diffuse galactic nebulae which photograph strongly by red light. By the use of red-sensitive film and a deep red filter we have been able to photograph a number of nebulae which are exceedingly faint on blue-sensitive negatives. [1]

There are several distance estimates available for Sh 2-261 / HD 41997. If the further distances are correct, Sh 2-261 is likely part of the Gemini molecular clouds in the Perseus arm. If the closer 1000 pc distance is correct, then it appears to be part of the Orion spur. 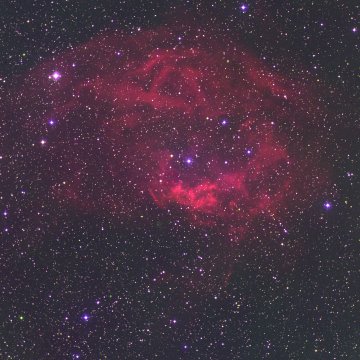