The adjacent HII regions Sh 2-152 and Sh 2-153 appear to be physically related, with a major source of the ionising radiation being located in the brighter Sh 2-152 in an unnamed O9V star.


According to Russeil, the ionising star for this nebula lies at a distance of 2390 +/-210 parsecs and this is likely the distance for Sh 2-153 as well.[1] This suggests that this nebula (and likely the entire molecular cloud complex it is part of) may have the same distance and direction as the dusty Cas OB2 association.

The adjacent HII regions Sh 2-152 and Sh 2-153 appear to be physically related, with a major source of the ionising radiation being located in Sh 2-152 in an unnamed O9V star.[2] 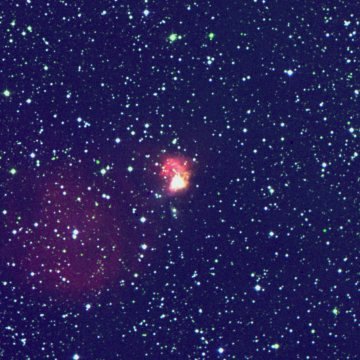