This giant HII region, which I call the Dragon nebula, is ionised by two WR stars (WR 152 and WR 153) and OB stars in several embedded clusters. WR 153 and an O 8.5 star lie near the middle of the radio shell associated with this nebula.

This nebula is also prominent in radio and infrared images.


In the huge Cep OB1 association (which may not be a single association). [1]

In 2010 the Monthly Notices of the Royal Astronomical Society published an issue with several papers on Sh 2-132, making this an unusually well studied HII region.

Star clusters in the nebula [4] 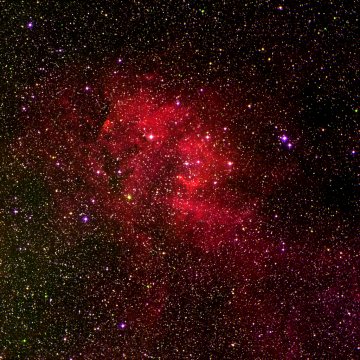