Sh 2-117 is composed of the North American and Pelican nebulae, NGC 7000/IC 5070/IC 5067, which are visible through gaps in the Rift system of dusty giant molecular clouds that separates the Gould Belt from the Cygnus X complex.

The radio source W80 appears in this direction. A 2009 paper concludes that W80 is generated only partly by Sh 2-117 and includes emission from 4 distinct sources located at different distances along the line of sight.

Only a small part of this large and relatively close region appears in this image. You can see a better image of this huge nebula here.


The radio source W80 appears to be four distinct structures located at different distances along the line of sight. [1] 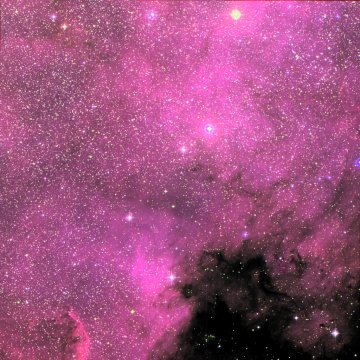