The massive OB cluster Trumpler 27 visible towards the edge of this nebula lies at a distance of 1211 pc according to Kharchenko.[1]

A 2008 paper by Piskunov, Schilbach, and Kharchenko et. al. finds that NGC 6383 has about 400 solar masses and Trumpler 27 has about 1600 solar masses.[2] Although both clusters appear to lie at about the same distance, it is the less massive cluster that ionises the nebula, presumably because HD 159176 lies within a large cloud of molecular hydrogen but the area around Trumpler 27 is clear of such gas.

The clusters and field stars in this region (which include several Wolf-Rayet stars) are visible in this false-colour hydrogen-alpha image from the Milky Way Explorer.

Curiously, a 2000 paper by Dutch and US astronomers, which is otherwise very thorough, claims that NGC 6383 is a member of the Sgr OB1 association. In fact Sgr OB1 is located several degrees away on the opposite side of the galactic centre. [4] 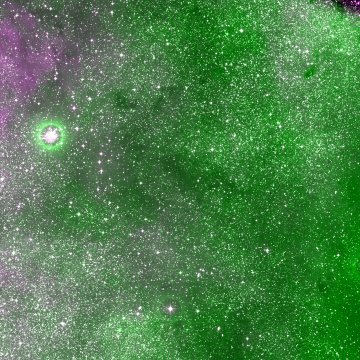