Near by is the Wolf-Rayet star WR 93, which is also a multiple star system with a class O7-9 companion.

The Cat's Paw nebula NGC 6334 lies at approximately the same distance and is separated from it by a dark cloud. You can see both nebulae together in this image.

An amazing closeup of part of this nebula can be seen in this Hubble image.


Contains the star cluster Pismis 24 which includes a multiple O4 and O4-5 star system. Near by is the Wolf-Rayet star WR 93, which is also a multiple star system with a class O7-9 companion.[1]

At the same distance as NGC 6334 and separated from it by a dark cloud.[2] 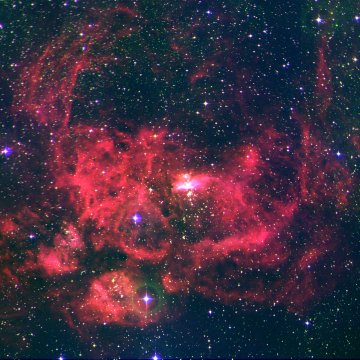