RCW 121, RCW 122 and RCW 123 are probably ionised by stars in the Havlen-Moffat 1 cluster. There is a large and very uncertain range of distance estimates for the objects in this direction, from 2000 to 5000 parsecs.

A 2012 study used radio parallax to determine the distance to a maser in the direction of RCW 122 as 3380 parsecs, strongly implying that this is the distance of the entire Havlen-Moffat 1 star formation region.

RCW 122 separates into at least two distinct sources in infrared. The brightest one by far is IRAS 17167-3854, which is sometimes further subdivided into RCW 122A and RCW 122B. Dutra and colleagues locate the infrared cluster [DBS2003] 119 in this direction at 2000 parsecs. A distinct smaller nebula to the northwest in galactic coordinates is IRAS 17158-3901, also known as RCW 122C. These sources are ionised by several O-stars, including one as bright as O4.

A 2008 paper concludes that RCW 121 and RCW 122 are embedded in a 1.2 million solar mass molecular cloud and both nebulae are likely ionised by several O7 V class stars.

The larger region around RCW 121, RCW 122 and RCW 123 is spectacular in infrared. This Spitzer image shows only a part of this region. While not as detailed, this MSX image shows a wider view of the region in which the compact HII regions RCW 121 and 122 are seen to be bright knots at the rim of a vast star forming cavity centred on the ionising cluster Havlen-Moffat 1 and filled by the diffuse HII region RCW 123.


RCW 121 and RCW 122 are embedded in a 1.2 million solar mass molecular cloud and both nebulae are likely ionised by several O7 V class stars with a distance of about 5000 parsecs.[1]

The massive star formation region RCW 122 is ionised by several O-stars, including one as bright as O4.[3] 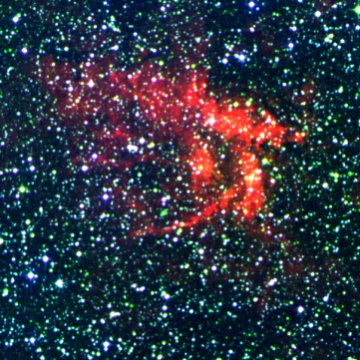