This ring nebula surrounds the Wolf-Rayet star WR 6 (EZ CMa), which is one of the closest Wolf-Rayet stars to our solar system and may also partially ionise Sh 2-303 and Sh 2-304.

This distance to WR 6 is a matter of some controversy. The Hipparcos astrometric satellite results were used in 1997 to determine a parallax suggesting a distance of about 575 parsecs. However, other researchers strongly disagreed with this estimate and proposed distances of up to three times this amount.

A revised Hipparcos analysis published in 2007 using the same data determined a very different parallax and a distance of about 1400 pc, much closer to other estimates.

A striking narrow-band image here shows the strong ionised oxygen emission from Sh 2-308, which the photographer calls the Gourd nebula. 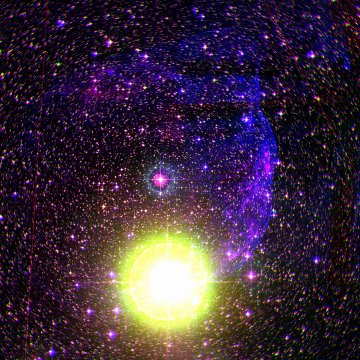