This vast nebula, one of the largest single HII regions known in the Milky Way, is ionised by two multiple star systems (Tau Canis Majoris and UW Canis Majoris) each made up of several O-class stars. This image shows only the brightest part of the enormous Sh 2-310 complex.

The intense radiation from the Tau Canis Majoris and UW Canis Majoris star systems has created a cavity in the molecular clouds at the centre of Sh 2-310, which is located beyond the upper right of the image.

At least one scientific paper notes the "arrow-shaped bright rim" shown in this image. Perhaps Sh 2-310 should be known as the Arrowhead nebula?


The extremely luminous red supergiant VY Canis Majoris is located in the direction of the bright rim. (This incredible star is green in this false colour image because of the infrared radiation emitted by the large dust cloud it ejects.)

You can see the full extent of the nebula in this false colour hydrogen-alpha image and this black and white SuperCOSMOS image. The F8Ia supergiant Wezen (Delta Canis Majoris) is visible towards the bottom of the nebula, but this is a foreground object.

Tau Canis Majoris, which may be one of the brightest stars in the Milky Way, is sometimes called the "Mexican jumping bean star", allegedly because of the way it moves around in the eyepiece of amateur telescopes. It is the hottest star within the NGC 2362 star cluster.

Radio parallax measurements of VY Canis Majoris give a distance estimate of 1140 (+110/-90) parsecs. [2]. This implies that either Sh 2-310 is closer than usually estimated or that VY CMa is a foreground object.

The green (infrared) star on the bright rim is VY CMa. The bright star (purplish) at the top of the rim is the B5III star HD 58612 (this has a visual magnitude of 5.781 and so presumably is much nearer than this nebula). [SIMBAD] 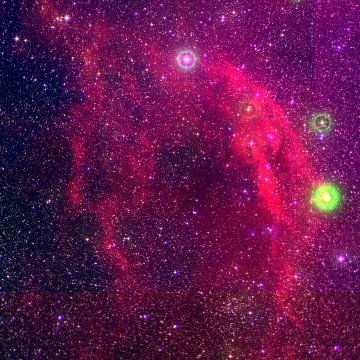