Although very little appears in the scientific literature on the mysterious HII region Sh 2-124, located some distance to the west of the Cep OB1 association, recent detailed hydrogen-alpha imaging done for the IPHAS project reveals the structure of this violin-shaped nebula in spectacular detail.

Infrared imaging from MSX reveals a bubble in this direction.

Felli and Harten give a list of 5 ionising stars, including the O7.5 class LS III +50 28, and support the BFS distance estimate of 2600 parsecs. However, other sources argue that this star may be too cool to be the ionising star.

Chini and Wink identify two uncatalogued ionising stars, with classes O7V and B2V, and give a distance estimate of 3600 parsecs.

Crampton, Georgelin and Georgelin give a kinematic distance (based on gas velocity) of 4400 parsecs.

This paper includes a radio image of Sh 2-124 as it is in the same field as the supernova remnant CTB 104A, which the paper is actually about. There is no further information about the nebula, however.[5] 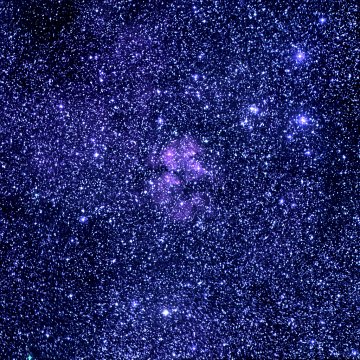