There seems to be confusion about the identification of Bran 300B and Bran 300C. SIMBAD identifies Bran 300B with the star cluster NGC 3247, which Avedisova places in a separate star formation region with RCW 49. SIMBAD identifies Bran 300C with RCW 50, which Avedisova places in a third star formation region separate from either RCW 48 or RCW 49.

You can see a good image of NGC 3199 on the Astronomy Picture of the day website.


According to a 1989 paper, the exciting star is moving at a rate of 60 km/s into the gas that makes up the nebula, like an interstellar snow plough.[1] However, a 2001 paper based on Hipparcos measurments show that the star is actually moving in quite a different direction and hence could not be causing a bow shock. [2] 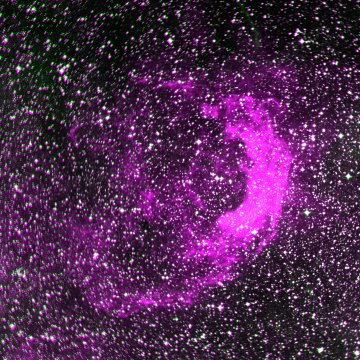