There are a wide range of distance estimates for this nebula.

According to a third source, RCW 45 and RCW 46 lie at the eastern edge of the chimney GSH 277+0+36. The chimney is at a distance of about 6500 pc on the outer edge of the Carina arc, is more than 600 pc in diameter, and extends at least 1000 pc above and below the Galactic midplane.

RCW 46 is located just below a huge cavity visible in infrared as can be seen in this MSX image, but little infrared emission is visible in the direction of RCW 46 itself. You can also see another infrared image of RCW 46 taken by 2MASS, which shows the infrared star group [DBS2003] 42 at its centre. 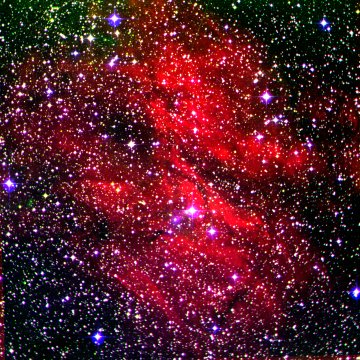