The giant HII region NGC 3576 is ionised by a large star cluster visible in the infrared and at least 10 times brighter than the Orion nebula. Curiously for such a prominent HII region, no very hot O-stars have yet been identified in the central cluster. A 2002 paper finds the brightest star to be the B1 V FBDC 48. (Although the paper says that the data might allow for this to be a late (cool) O-star as well.)

You can see a good visual image of NGC 3576 here and see the MSX 8μ infrared false-colour image here.


Ionised by a large star cluster visible in the infrared.[1]

NGC 3576 is one of the brightest HII regions in the galaxy and is at least 10 times brighter than the Orion nebula. The hottest star identified is the B1 V FBDC 48. (Although the paper says that this might be a cool (late) O-star.[2] 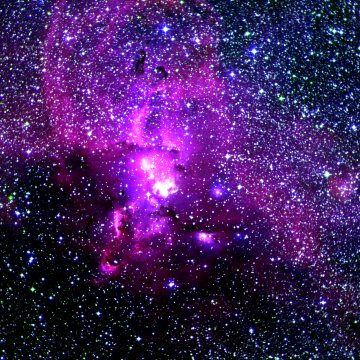